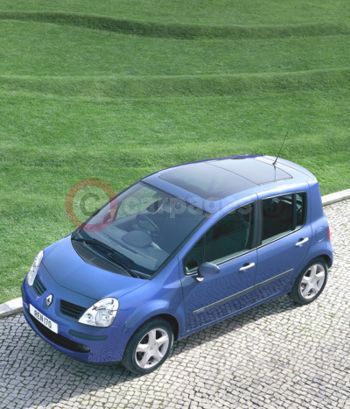 With the trend for car downsizing continuing unabated, Renault’s multi-award-winning Modus, the "small car with a big heart", has been given a fresh look for the 2007 model year and is on sale now.

The new range has quite a reputation to live up to. In just a little over a year, Modus has scooped numerous awards, including Diesel Car Best Supermini, Scottish Small Car of the Year and Test Drive magazine’s Compact MPV and Overall Readers Award. Based on this impressive awards haul, fans of the current Modus will be pleased to learn that the revised range will continue largely in the same vein as today’s, in terms of choice, design and price.

Renault’s spacious and versatile Modus has only been available in the UK since September 2004, so the changes to the new 2007 range are subtle, both inside and out, with the emphasis firmly on just refreshing the car’s already modern appearance rather than tampering with the car’s already popular combination of cheeky looks and practical interior.

The changes start with the exterior’s new clear ‘crystal’ indicator lenses for the front and rear lights and the wing mirror indicators, while on the inside each trim level gains new seat upholstery and higher quality interior materials for the dash and centre console.

The 2007 model line-up offers the widest selection of engine, gearbox and trim level combinations in its class. The trim levels consist of: Authentique, Expression, Dynamique, Privilège and Initiale, with the only model not continued into the new range being the 1.4 16V 98 Initiale.

The Modus engine range is just as comprehensive, offering a powerplant to suit every kind of driving style whether it be for economy, refinement or power. A total of six engines are available, with three diesels - 68, 86 and 106hp, and three petrols - 75, 98 and 111hp, all driven via five-speed manual gearboxes with the exception of the dCi 106 which is six-speed. For more comfort and less driver stress in the city and on longer journeys, the clutchless Quickshift5 gearbox will continue to be available with the dCi 86 engine alongside an automatic gearbox for the 1.6 VVT 111 petrol.