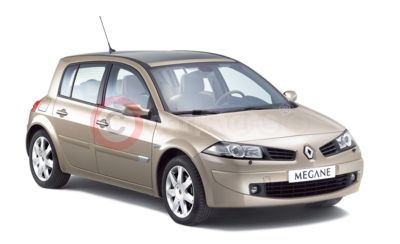 The current Renault Mégane took the market by storm when it was launched with its distinctive design and character including that famous “shaking that ass” rear end. For 2006 it has received the first “nip and tuck” facelift affecting five of the Mégane bodystyles, namely the Hatch, Sport Hatch, Sport Saloon, Sport Tourer, Coupé-Cabriolet. The Scenic and Grand Scenic, which were launched after the rest of the range, remain unchanged.

On sale from 1 February 2006, fans of the shapely rear end will be relieved to know that has not changed, and many fans there are too, as the Megane range has been Europe’s best selling model now for three years including 2005.

New Mégane's facelift coincides with a revised range of engines, all of which are Euro 4-compliant. The diesel range has been expanded with the introduction of a high power 150hp version of the latest 2.0 dCi unit - the new market benchmark in performance and fuel consumption - as well as the inclusion of a periodic regeneration particulate filter for the 1.9 dCi unit, whose power output has been upped to 130hp. The New Mégane diesel range has also been extended to include the award-winning 85hp and 105hp versions of the 1.5 dCi engine. The 105hp variant alone boasts the best power/fuel consumption/CO2 emissions ratio in its class.