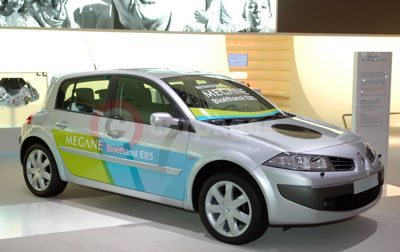 Renault UK will launch its first bioethanol car into the UK market when the Mégane Hatch E85 goes on sale at the end of 2007.

This will be Renault’s first bioethanol vehicle to be sold in the UK and is in line with eCO2, the company’s commitment to producing environmentally-friendly vehicles for the whole life cycle of the vehicle, from design to their eventual recycling. With eCO2, Renault provides customers with a choice of vehicles across its range, both kind to the environment and motorists’ pockets, including the new Mégane E85.

The new Mégane E85 uses the 1.6 16V 105 engine. The existing 1.6 16V petrol engine has undergone a number of modifications so that it adapts automatically to bioethanol fuel. The main upgrades have been made to the fuel tank, injection system and combustion chambers. The new vehicles were developed with input from expertise developed in Brazil, where Renault has been selling FlexFuel versions of Clio and Mégane running on bioethanol E100 since 2004.

The benefits of E85 fuel are widespread and are particularly relevant for the Fleet market. A new tax incentive sees a 2% discount on employees’ taxable car benefits where the car is capable of running on E85 fuel, an ethanol fuel based on a mix of at least 85% ethanol with conventional petrol. The introduction of the Mégane E85 will offer fleets an innovative, modern, comfortable, spacious and Euro NCAP five-star safety-rated car perfect for user-choosers and larger fleets.

Renault considers biofuels to be one of the most effective solutions in the long-term quest for control over CO2 emissions. Biofuels are ecologically effective, as a diversified, renewable, plant-based energy source. And they are economically effective because the cost of developing compatible engines is reasonable, and the cars are therefore affordable. Biofuels will also be helping to cut down energy dependency on fossil fuels.

The crops used to produce biofuels absorb CO2 from the atmosphere as they grow (part of the process of photosynthesis). E85 bioethanol can achieve CO2 gains of up to 70% over the so-called well-to-wheel cycle compared to the same model powered by a conventional petrol engine. The figure is about 20% for B30 biodiesel.

Biofuel-compatibility is one of the criteria behind the Renault eCO2 signature. With a Mégane running on bioethanol (E85) alongside other vehicles running on biodiesel, such as B30 powered Light Commercial Vehicles (LCVs) which are currently being evaluated for the British market and will be tested with some fleet operators, Renault confirms its commitment to this technology, as one of the few carmakers to offer its European customers cars running on both types of biofuel.

Bioethanol is made by distilling fermented vegetable matter, typically in the form of wheat or beet in Europe, sugarcane in Brazil, or maize in the USA. The resulting fuel is then mixed with petrol in varying proportions: 5% for E5, 10% for E10, 85% for E85 and up to 100% for E100.

Prices and full information will be announced when Mégane E85 goes on sale at the end of 2007.