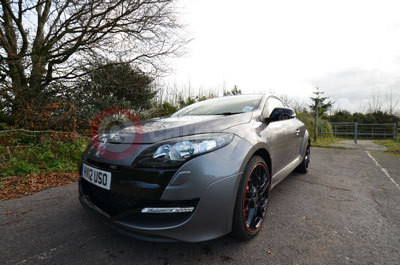 Renault arguably pioneered the ‘hot hatch’ with the introduction of the Renault 5 Gordini back in 1975, ahead of the Volkswagen Golf GTi - followed in 1980 by the legendary Renault 5 Turbo which was capable of 0-62 mph in just 6.9 seconds. It was intended only to build 400 units, but it carried on for nearly 10 years under various guises.

In May 2003 the first Renault Megane Renaultsport 225 arrived in the UK and since then there have been a few incarnations, all setting records around the Nurburgring Nordschleife circuit. In 2008 the R26.R established a new lap record for a front wheel drive production car of 8 minutes 17 seconds beaten in 2011 by the Renaultsport 265 Trophy, which sliced a full nine seconds off the lap time recording 8 minutes and 8 seconds.

So it was with some eager anticipation that we decided to test the latest version - the Megane Coupe Renaultsport 265 Cup. Our test car had a base price of £24,840 which with the optional extras came to £28,535.

To start with I wondered what all the fuss was about, sure the Renaultsport 265 Cup was quick but it felt disappointing, it was not until I discovered how to tap the extra 15 bhp that the car came alive. Does 15 extra bhp really make a difference?  Well yes and no, it is more about the engine management that permits swifter engine response and provides extra low down torque, you certainly notice the more aggressive stance.

In normal ‘everyday’ mode the 265 Cup outputs 250 bhp/340Nm which blends performance with economy via smoother throttle inputs and reduced power. The ESC, ASR traction control and emergency brake assist are all fully activated.

In ‘sport’ mode the ESC and ASR are still active but they intervene at a later point and allow the car to slide to a certain extent, so long as the skid doesn't exceed a given threshold. But you gain an extra 15 bhp/20 Nm with the turbo pressure increased by 0.2 bar to 2.5 bar, and changes are made to the air intake in line with the higher pressure and running temperatures.

There is an ‘off’ mode which disengages ESC and ASR while the pedal mapping ensures instant response from the engine and delivers all available torque and over-torque at low revs.

In November 2012, Renault introduced a new stop & start system which means on the official combined cycle fuel consumption is recorded as 37.7mpg (previously 34.4 mpg) and CO2 emissions are 174g/km. Our figures were 34 mpg on the motorway and around 22 mpg under normal ‘fun’ use.

Overall the Renaultsport 265 Cup’s 2.0-litre turbocharged engine is very willing to entertain throughout the rev range; the ‘sport’ mode is what makes it special. The 265 Cup has short gearing which makes it all the more engaging, although the gear change is a little notchy.

This is a 8-year+ news article, from our Renault archive, which dates back to the year 2000.

If in doubt check with your local Renault dealer as car prices and technical data will have changed since 2013.