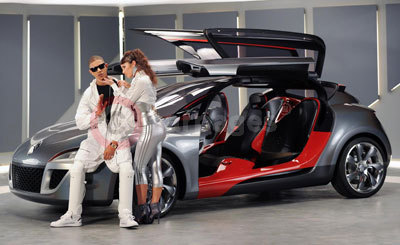 Renault Megane Coupe-Concept in N-Dubz Say It's Over Video

British MOBO-award winning hip-hop group N-Dubz has just released the third single from the platinum-selling album 'Against All Odds' and when the London-based band was looking for a futuristic car to feature in the video for 'Say It's Over', Renault was happy to help.

The stunning Renault Megane Coupe-Concept, with its dramatic 'dragonfly-wing' double doors, fitted the role perfectly as a car set in a future. The collaboration between Renault and N-Dubz led to the striking two-door starring alongside Dappy, Tulisa and Fazer in the video, filmed at a secret location in the capital.

The first two videos from the 'Against All Odds' album have already racked up over 10 million viewings on YouTube and the new film, featuring the Renault Megane Coupe-Concept, has had almost 200,000 hits in the week since it's release.