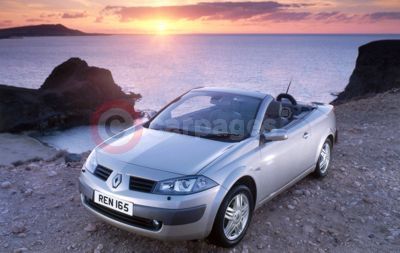 The temperature’s rising, or so the UK weathermen would have you believe now we’ve hit June. But it’s not just the heat on the street which is warming up, as the UK market for convertibles is also getting in on the act, particularly the Renault Megane Coupe-Cabriolet. Now the country’s best-selling, medium-sized drop-top with sales in the first four months of this year up nearly 200%, Renault’s drop-top Mégane is now outselling the likes of the Peugeot 307 CC, Vauxhall Astra, Mazda MX-5 Review and MG TF.

The latest weather predictions, courtesy of the Met Office, suggest that we’ll all be basking in 100°F plus temperatures within a matter of weeks, so it’s a good job then that drivers have two choices to cool down - drop the roof, or use the air conditioning which comes as standard on virtually every Megane Coupe-Cabriolet model.

Having said all this, we all know that you can’t always rely on the weather forecasters - a certain Michael Fish’s comments before the hurricanes of October 1987 told us that. So, on the off chance that the weather does take a turn for the worst, it’s comforting to know that at the touch of a button, the electric roof can be raised in a mere 22 seconds. Even during summer showers, thanks to the only folding car glass roof in the world as standard, Megane Coupe-Cabriolet passengers can enjoy the UK’s glorious scenery whatever the weather.

The news is just as bright for the more fair-skinned among us too. For those people who’d prefer to avoid the sun’s powerful midday rays, the Megane Coupe-Cabriolet also features two ways of blocking out the harmful effects of the sun. The first, its 4mm thick Venus roof glass, filters out infra-red sunlight and absorbs most of the sun’s energy, while there’s also the standard roof blind as an added sunscreen. All this means that you can still enjoy the warmth of the barmy summer, but without the sunstroke and suncream!

The Megane Coupe-Cabriolet’s svelte lines and unique roof design aren’t just attracting sunworshippers either, as the car is having a scorching year so far. Sales of the sleek four-seater between January and April this year were up a stunning 192% on the same period last year, with sales of 2,664 units, versus 911 the year before. What makes this achievement of almost tripled sales even more remarkable is that the market has fallen 11.4% during the same period, with Mégane the only car out of nine in its class to post an increase in sales.

A bit like the weather we’re expecting, the reasons for the car’s popularity are certainly clear. The Mégane also benefits from having a diesel engine option, a rarity in its class, and accounts for a staggering 75% market share (790 units), even in a sector which is down 12.6% on the previous year. The picture is much the same when it comes to automatic sales, with the Mégane boasting over a third of the market, with 36.6% of sales (332 units), an almost unbelievable rise of 403% on 2004 performance.

Beyond the car’s fuel and transmission choices, much of the Mégane drop-top’s success can undoubtedly be attributed to a strong set of customer offers, including 0% finance over three years and 40% deposit, plus the car’s unrivalled levels of standard equipment, its five-star Euro NCAP crash test performance and the recent launch of the flagship two-litre turbo 165hp engine.

With the UK’s temperature looking set to soar to record temperatures and Renault open-air motoring starting at just £17,220, it looks like the only thing being left in the shade this summer will be the competition…