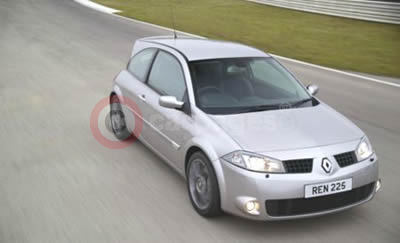 The latest addition to the Renaultsport stable, officially unveiled at the Geneva Motor Show on 1st March, takes its lead from the awe-inspiring Megane Trophy race car which is set to grip the motor racing world as part of the 2005 World Series by Renault race meetings, which starts in Zolder, Belgium on 30th April.

Launched in April 2004, the current Megane Renaultsport 225 on which the Trophy is based, has continued to attract hoards of fans, particularly as it’s as comfortable on long distances as it is on the track. However, much to the delight of driving fans everywhere, the Renaultsport team hasn’t been content with the plaudits flooding in for their latest creations, so they have now taken things once step further by enhancing the car’s brakes, chassis and steering to give the purest driving experience possible for the performance enthusiast and track day driver.

As the largest market by far for Renaultsport products, the UK is to receive the largest allocation in the world of the new flagship Megane, but as the new Trophy will only be available as part of a limited production run, the UK will take delivery of just a few hundred examples. With demand expected to outstrip supply, the second piece of good news for drivers is that the engineering changes made to the Trophy will be available as a ‘Cup Chassis’ option on the standard Megane Renaultsport 225 a bit further down the track.