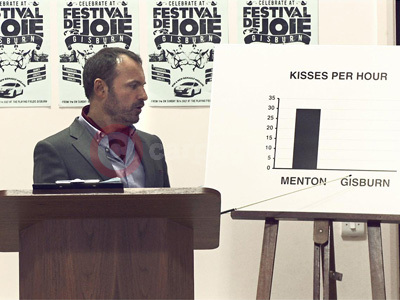 Claude In The Renault Megane Experiment

This weekend, Lancashire will roll out the red carpet for Claude - the Frenchman who caused uproar the last time he visited our shores when he compared Gisburn to his home town Menton.

Frenchman Claude is the star of the Renault Megane Experiment; a short film of the actor who went to Gisburn and convinced villagers he was a 'joie de vivre' expert from Menton, Cote d'Azur, France. Over the course of the week, he berated the locals for their lack of 'joie', persuaded the proprietor of the White Bull to convert his pub to the 'Boeuf Blanc', taught the meaning of 'joie de vivre' to children at the local primary school and staged a 'Festival de Joie' on the local playing fields.

Despite a hostile reception, Claude won over the villagers, successfully bringing 'joie' (and a Renault Megane) to Gisburn.

But the local Mayor, Lois Rimmer, wanted more. She invited him back and even offered her services as a tour guide.

"Far from being a joke, the Ribble Valley is a beautiful area and the place, no less, where HM Queen Elizabeth II wants to spend her retirement."

"Ribble Valley has been described as the Dordogne of Britain and has some of the most spectacular scenery in the country as well as award-winning restaurants, shops and schools. We think he'll be impressed."

"I am thrilled to be invited back," said Claude. "Since I gave Gisburn the Megane, they have started the Zumba Classes. They are opening a deli. And soon, they will twin Gisburn with Menton. Can a car change a town? I think the answer is a definite 'oui'."

Owners Maxine Bridge and Sharon Smalley, said, "The campaign got locals talking about Gisburn and what could be done to improve the village. It convinced us that the shop could be a success. So something really good has come out of Renault's campaign."

Councillor Rimmer will take Claude on a short tour of the surrounding countryside. He will visit Clitheroe Castle, (built by a Frenchman) and be presented with a commemorative sausage at Cowman's sausage shop.

He's also planning to meet some of his 12,500 Facebook friends.

Since the film launched in August 2010, and as a result of the interest sparked by the campaign, Gisburn Parish Council have declared they wish to explore the possibility of officially twinning Gisburn with Menton, which Renault is supporting.