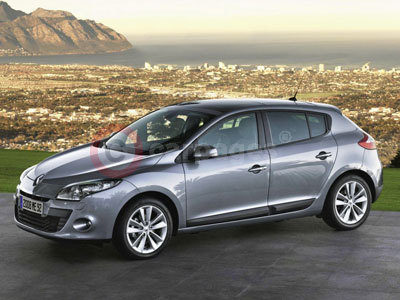 The New Renault Megane is going be unvieled at the Paris Motor Show next month.

Poised to lay down the gauntlet to its lower-medium rivals, including the next-generation VW Golf, one of this year’s most eagerly-awaited new models, New Mégane, has arrived. Previewed for the first time in five-door form, in the lead-up to its world premiere at the Paris Motor Show in October, the successor to one of Europe’s best-selling cars ushers in a new era of styling, handling and quality.

Retaining characterful styling, New Renault Mégane's is immediately eye-catching. Its dynamic, elegant styling has been honed to appeal to car enthusiasts, with several cues taken from the world of sport. New Renault Mégane is robust, too, with the accent very much on the fit and finish of its panels, as well as on that of the materials used in its construction. The new model has also benefited from the progress that has been achieved across the Renault range in reliability and durability.

New Renault Mégane's interior is extensively equipped with practical, comfort-enhancing features. These include combined analogue/digital instruments incorporating a new, easier-to-read colour-coded cruise control/speed limiter interface. The list continues with a host of equipment normally associated with a higher segment, such as hands-free entry and ignition, automatic locking as the driver walks away from the car, Carminat Bluetooth CD navigation system and custom-developed audio system (3D Sound by Arkamys).

New Renault Mégane's on-road performance lives up to the high standard promised by its looks, with precision, control and efficiency combining to deliver a particularly enjoyable and reassuring ride. A broad, extensively renewed range of dCi and TCe powerplants combining performance and respect for the environment will be available, with four diesel engines that can claim CO2 emissions equal to, or less than, 120g/km.

New Renault Mégane has been designed to offer best-in-class safety too. Among its features will be double side impact sensors and dual-chamber airbags as seen on Laguna III, aimed at minimising the consequences of a side-on collision.

It is also a socially responsible car which is 95 per cent end-of-life recoverable by weight, while almost 12 per cent of the plastics it contains are sourced from recycling, equivalent to an average of 22kg per car.

New Renault Mégane marks the beginning of Renault's renewal of its C-segment range. With market share of more than a third, this segment has long been the biggest in Western Europe and makes a significant contribution to Renault's performance in terms of both volume and profitability.

By 2010, the New Mégane family will include six different models, each of which will have its own distinct and assertive personality. These six models have been conceived essentially for customers in European markets and will be manufactured in Palencia (Spain) and Douai (France). Other models will be available in non-European markets equipped with specific technical solutions suited to local conditions.

For almost two years, Renault's design and engineering teams focused their attention on three main areas of development, namely reinforcing the personality of each member of the Mégane line-up, ensuring a balanced offer in terms of performance and equipment, and targeting best-in-class positioning for all key features.

New Renault Mégane, which goes on sale from November 2008, is the next car in the Renault Commitment 2009 plan and consequently benefits fully from the progress achieved in terms of quality on preceding models.