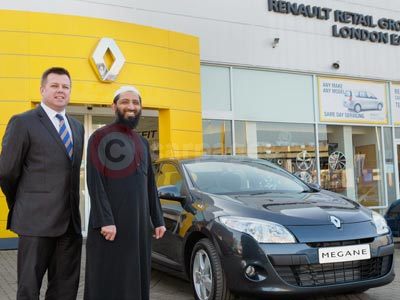 Yunus Dudhwala With His Renault Megane

NHS Employee of the Year winner and 'healthcare hero' Yunus Dudhwala has driven away in his prize, a new Renault Megane, courtesy of Renault.

He was shortlisted, along with 19 other nominees, for the title in the inaugural Healthcare, Excellence and Leadership awards 2010. The award was organised by 24/7 Media Group and held at the Royal College of Surgeons in London in October 2010.

Yunus began work with the trust in 1998 when he started as a volunteer Iman and Muslim Chaplain before being offered a part-time contract as Muslim Chaplain. In 2003, he became Head of Chaplaincy, a full-time role, which saw him become the first person in the UK to lead a minority faith in the NHS.

He also acts as a faith adviser to the College of Healthcare Professionals on their National Professional Committee, giving advice on minority faith issues, and dedicates his working life to helping grieving families.

He has helped countless patients, families and staff at very difficult and challenging times, and has helped devise and change policies, practices and environment in the Trust to improve the experience for patients and families.

The award was set up to recognise excellence in the NHS and the 'healthcare heroes' are voted for by fellow healthcare professionals and members of the public. Yunus was voted as the winner and recently took delivery of his prize, a brand new Megane Hatch Dynamique TomTom dCi 130, worth £20,000, from his nearest Renault dealership, Renault London East.

He said: "I was extremely humbled and honoured by the support shown to me by staff in the hospital and the community at large for me to achieve this award. It is not only about me, it is an award that recognises the hard work of all staff in the NHS.

"This a great credit to chaplaincy as on many occasions it is a hidden department in hospitals, but the support received from the community shows how important spiritual care is to many patients and families, especially at the time of significant news and bereavement.

"It was a great evening, but when the announcement was made, it got even better! It was an amazing, amazing feeling as so many people who work in the NHS do a fantastic job and it's great for them to be recognised.

Scott May, sales manager at Renault London East, handed over the keys to Yunus' car, complete with a brand new '11' plate, at the dealership in Ilford.