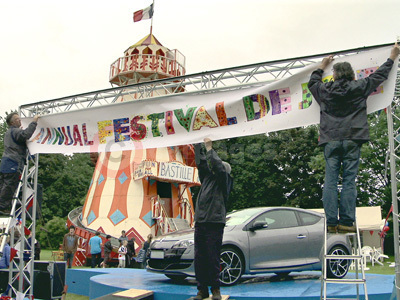 Renault is launching a new advertising campaign for the Renault Megane, created by Publicis London.

The campaign, called 'The Megane Experiment', is the film of an actor named 'Claude' who goes to Gisburn, Lancashire where there are no Renault Meganes, and convinces villagers he is a 'joie de vivre' expert from Menton, Cote d'Azur, France, where there are many.

Over the course of the week, he calls a meeting to explain that villages and towns with more Renault Meganes have higher fertility rates, berates the locals for their lack of 'joie', convinces the proprietor of the White Bull to convert his pub to the 'Boeuf Blanc' complete with an accordion player, teaches the meaning of 'joie de vivre' to the primary school, gets interviewed by a member of the local Press and, finally, puts on the 'Festival de Joie' on the local playing fields.

The film was directed by Oscar-nominated director Henry-Alex Rubin, who shot 48 hours of film over five days and described Claude as a "French Borat with a heart." Over the course of the shoot, the actor offered raffle tickets in exchange for test drives in his Renault Megane, which he gives away at the 'Festival de Joie'. Despite taking place in the rain, it still attracted an impressive 300 locals, from its total population of only 500.

A short documentary with behind the scenes footage of the campaign is hosted on the website, which also gives people the chance to win prizes, a 'Joie de Vivre' psychometric test and a chance to compare how joyful their community is with others.

More Megane attributes can be discovered via a fourth section, where Claude, and his new English friend 'Hughie', star in a series of short, humorous video clips. Content is replicated at the Facebook fanpage and the commercials and video clips will also be posted on the 'Renault UK official' YouTube channel.

The teaser campaign, which comprised TV, press and banner ads, drove people to the website, where they could bet on aspects of Claude's 10-day journey from his home in the South of France to Gisburn with gaming 'chips' awarded by Facebooking friends.

Phil York, Marketing Director, Renault UK, comments, "We wanted a campaign which broke from the norm, so a humorous, lighthearted Anglo-French cultural comparison of two such distinct villages works well for our brand. The Megane is an iconic symbol of French 'joie de vivre' and we're hopeful that getting more of them on the road over here will not just bring a little more happiness to the residents of Gisburn, but also the rest of Britain too."

Tom Ewart, Executive Creative Director, Publicis, says, "This isn't just a TV campaign, our ambition was to create content without form and adapt it to every format at our disposal - broadcast, digital, social media and editorial PR."