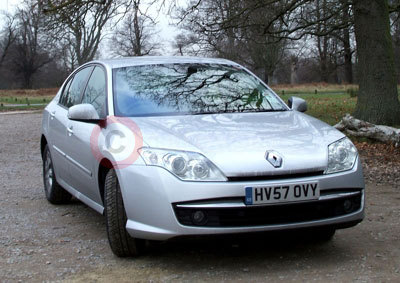 In 1994, Renault launched the first Laguna, as a replacement for the Renault 21 and so began a legacy of BTCC titles and top safety ratings.

Although Renault hasn’t competed in the British Touring Car Championship since 1999, the New Laguna, in some form, could just be the one to awaken the competitive beast. In the meantime, us lesser mortals can sit back and enjoy all that this third-generation, car has to offer. And that’s a lot.

One of the competitors of the old Laguna was the Ford Mondeo. Both of cars have moved on somewhat but the New Laguna is impressive enough to give the new Mondeo a good run for its money. Given the choice between the two, I would have to go with the French car, it is much more subtle and the general ambience is superior.

Launched in October (2007), the New Renault Laguna is only available as a hatch, in three of the four trims. However, on launch day, the order books were opened for the top-of-the-range, Initiale hatch and the Sports Tourer versions, with delivery from January 2008, which is also when they appear in the showrooms.

The test car was the Expression, which is the base model but not ‘basic’. The specification sheet does lean heavily towards safety features but there’s lumbar adjustment for the driver, electric windows all-round, powered and heated door mirrors, rake- and reach-adjustable steering column, tinted windows RDS radio/CD and the magical, Keyless entry. Every car should have one, because the automatic locking and unlocking of the doors when you approach or leave, is a boon. I spent the whole week driving around, without taking the key-card out of my bag, thanks to the keyless start/stop.

Anyway, the Dynamique, which is expected to be the best-seller, adds cruise control with speed limiter, partially leather-clad sports seats, front foglights and an F1 steering wheel. Dynamique S replaces the previous Privilege trim and builds upon this list but it’s the all-singing and dancing, Initiale that tops the bill for elegance and goodies. Prices for the hatchback range from £15,990 to £23,400.

Elegant is a word that is used a lot in this report because that is the best description. The long bonnet counterbalances the heavier rear end and thankfully, the Renault designers have avoided the snub-nosed look but have still managed to accommodate pedestrian safety issues. The front grille is wide but doesn’t give the impression of an ugly grimace, while the angular headlights emphasise the bonnet creases.