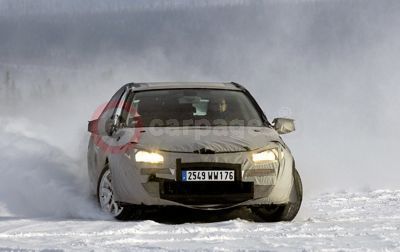 The world debut of Renault’s New Laguna at next month’s Frankfurt Motor Show is looming on the horizon. With elegant styling, impressive handling and ride comfort, and a wide range of top-level petrol and diesel engines, the lead car of the company’s ambitious three-year growth plan, Renault Commitment 2009, promises to cause quite a stir. Not just in its traditional volume manufacturer hunting ground in the upper-medium segment, but now also taking the challenge to the premium marques too.

One fundamental reason behind Renault’s unequivocal belief in the potential of its new model will become immediately apparent when the covers come off on the stand: its quality. Right from the first initial design stages through to production, the target of New Laguna being in the top three in its segment for product and service quality has been the driving force behind its development.

The emphasis on quality pervades every aspect of the car, from the fit and finish of the high-grade interior materials, right down to the reassuring, precision engineered ‘clunk’ of the doors as they close. Other details which have received particular attention to make life on board as serene as possible are the extensive soundproofing to prevent engine and road noise filtering into the cabin, as well as the new quiet air conditioning system developed in conjunction with Nissan.

Renault has gone to significant lengths to understand, interpret and execute the needs of its New Laguna buyers to give them true peace of mind, with 9,000 customer interviews conducted across Europe throughout the process.

Reliability and quality were two of the key themes to emerge from the research. The current Laguna is already ranked as one of the best cars in its class for reliability, having performed an impressive reversal of fortunes since the first phase of the car was launched in 2001.

The errors caused by the car’s electronics, cited as a weakness, would not be repeated this time. Electronic integration platforms for testing all of New Laguna’s electronic features were trebled from the prototype phase and 1,300 test routines were carried over the course of 1,140 days.

Away from the test benches and into real-world scenarios, the team for New Laguna, codenamed X91, went to great lengths to prove the car’s endurance and reliability. Tackling the harshest of climates and uses, 120 New Lagunas were put through their paces over the equivalent of nearly 4 million miles in all corners of the globe.

From the extreme cold and snow of Russia to the extreme heat, dust and high speed driving of Australia, onto the severe humidity and difficult urban conditions of Malaysia, the car proved exemplary. In particular, in Russia the rain sensor met endurance and response targets, while in Australia the new generation air-conditioning system proved its worth.