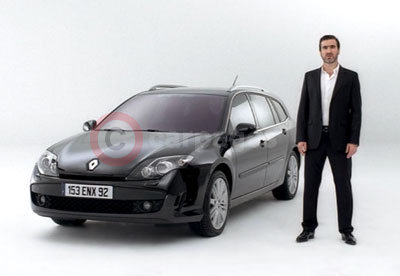 Soccer legend Eric Cantona and the new Renault Laguna are on screen from the 23rd March 2009 in a 90-second advert.

Renault has teamed up with footballer and actor Eric Cantona to make a truly original ad featuring the new Renault Laguna, which ranks among the best in its sector for quality.

The third installment of a web and TV campaign launched on 16th March 2009 with a trailer, a 15-second teaser and web banners, the film is presented as an infomercial - as interpreted by Eric Cantona. Based on the principle of direct marketing, the script covers the new Renault Laguna's many qualities while staying faithful to Eric Cantona's inspiration and personality.

The unique selling points of the new Renault Laguna are highlighted in clean and uncluttered shots, featuring simply the car and Eric Cantona, filmed against a white background. Chief among these selling points are the Renault Laguna's modernity, with Bluetooth navigation and an HD audio system with three-dimensional sound, safety, with eight airbags, and efficiency, with the world-exclusive 4Control four-wheel steering system.

The new ad campaign's innovative content is matched by its originality in terms of form. It costs less than a classic TV campaign and is broadcast mainly in late-night viewing slots to target the upper socio-professional audience. It also benefits from major exposure on the internet, maximising impact while reducing media outlay.

The 'Renault Laguna, Eric Cantona - The Meeting' will be broadcast starting on 23rd March 2009, mainly in France and the UK.