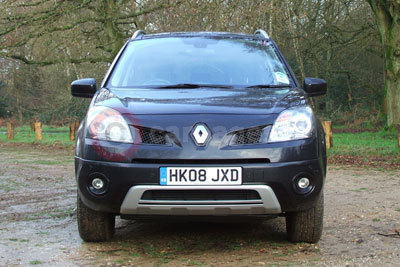 With so many so-called crossovers on the market, it's a wonder that Renault feels that there is room for one more - the Koleos.

Of course, it helps to have links with Nissan, makers of no less than five 4WD vehicles, including the QASHQAI. So it comes as no surprise that Renault's first crossover is based on the same platform that underpins the X-TRAIL with Renault design and built at the Renault Samsung plant in Korea.

The Renault Koleos is also the company's first model to be 'designed from the outset with four-wheel-drive.' That said, there is a two-wheel-drive version for those who like the size but have no need for off-road capability.

On the face of it, in terms of looks, the Renault Koleos is similar to the Nissan Murano with its somewhat bulbous nose and raked rear windscreen, but that is as far as it goes. The Renault Koleos has a more angular design that is all its own.

The front end features the Renault logo set into a heavy panel. Either side, the relatively small air intakes are angled upwards and outwards, the shape outwardly increasing in height to encompass the large, elliptical headlights. Below, the integrated bumper houses the front fog lamps and the test car, had the optional silver skid plates front and rear, which makes it look ready for anything.

Strong shoulder- and design-lines flow backwards from the front wheelarches, which are chunky but not overly so. The shoulder lines form a dart-like shape as they join the base of the C-pillar, emphasising the length of the car and directing the eye to the wraparound tail-lights.