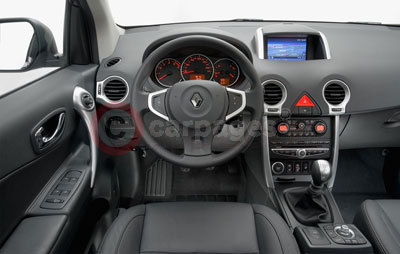 Koleos Dynamique S is available in two and four-wheel drive form, in manual and automatic transmission with the dCi 150 engine.

In addition to those offered on the Dynamique, standard features on Dynamique S include:

Prices for the Renault Koleos Dynamique S are:

Koleos Privilège is available in four-wheel drive form, in manual and automatic transmission and with the dCi 150 and range-topping dCi 175 engine.

Standard features in addition to those on the Dynamique and Dynamique S trims include:

The Bose audio system was developed with Bose’s engineers and Renault’s design staff to create a bespoke audio system adapted to the specific acoustic properties of Koleos. This system is the first from this prestigious brand to be fitted in a Renault.

Renault is also offering a range of accessories for Koleos including front and rear skidplates (£185), front guard and rear skid plate (£350), rear spoiler (£375), rear-seat mounted DVD system with one player and two screens at £995, integrated Bluetooth (£250) and illuminated kickplates providing protection for the front door sills (£175). All prices include VAT and fitting.

Koleos features some new-for-Renault technology, benefiting from the knowledge and expertise of the Renault-Nissan Alliance.

The Hill Start Assist function on Renault Koleos is just as useful for everyday motoring as it is off-road. The system is automatically activated on gradients of more than 10% to prevent the vehicle from slipping back down the slope. It also means there is no need for the driver to switch rapidly from the brake pedal to the accelerator pedal which is inherent in other vehicles.

The Hill Descent Control system offers even safer off-road motoring. This function is activated via a switch on the central fascia and automatically holds the vehicle’s speed at a maximum of four mph on downhill gradients of 10% or more without the need to use the brakes. Particularly useful when Koleos is use off-road, this system also contributes to active safety since it allows the vehicle’s downhill speed to be controlled on steep, snowy or icy slopes. It also works in reverse gear, too.

Koleos’ navigation system has a number of specific off-road features, including an altimeter and barometer. The vehicle’s angle of inclination, the slope and an altitude graph are equally displayed, while a digital compass takes the stress out of finding the correct heading when there are no signposts to be seen. This system uses data transmitted by elements already used for other functions, including the ESP sensor.

The ‘Super-fold’ system, introduced on New Laguna Sport Tourer, enables the 60/40 split-rear seat base to tip forward and backrest fold down all by the flick of one switch in the boot. With the rear seat in the folded position, the boot floor becomes entirely flat to further facilitate loading. The boot volume of 450 litres with all five seats in the upright position extends to a very generous 1,380 litres once the rear seat has been folded. The available space can also be compartmented thanks to the presence of several hooks which enable the multipurpose retention net to be fixed in a choice of ways. In keeping with Koleos' calling as a vehicle designed for outdoor leisure activities, its rear seat backrest is equipped with a ski hatch. The back of the front passenger seat can also be folded down to either form a table or permit the transport of items of up to 2.60m in length.

Koleos benefits from all the active and passive safety features you’d expect on a Renault. Euro NCAP results will be revealed later this year.

Renault’s new 4x4 crossover Koleos will be on sale in the UK on 4th July priced from £17,995 (for the two-wheel drive version) rising to £24,695, available in two diesel engines and in two or four-wheel drive form.