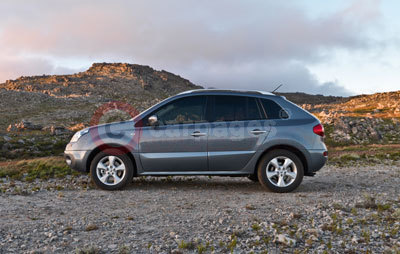 Koleos is Renault’s first-ever entry into the growing crossover segment, boasting MPV levels of comfort and interior space combined with robust exterior styling and genuine off-road ability. Its practicality is evident in its split-opening tailgate, 70 litres of stowage space and impressive boot volume of up to 1,380 litres with the rear seats folded. Off-road, Koleos excels with innovative features such as Hill Start Assist, Hill Descent Control system, the ‘all mode 4x4i’ system developed by Nissan for the X-Trail (which shares the same platform with Koleos), and approach and departure angles of 27 and 31 degrees respectively.

As well as the four-wheel drive, Koleos will also be available in permanent two-wheel drive form appealing to those who enjoy its distinctive, crossover looks and spacious MPV-like versatility complete with high visibility driving position, but have no need to use the vehicle off-road.

Renault Koleos is offered with a choice of two diesel 2.0-litre Alliance engines, the dCi 150 and the dCi 175. Unusually for a 4x4 crossover, Koleos is available with six-speed gearbox and in manual or automatic transmission.

CO² emissions for Koleos range between 191 and 221 g/km, with Koleos versions falling into Band F for CO² emissions.

The Renault Koleos beats the competition

Renault may be a newcomer to the 4x4 crossover segment, but it already beats some of its closest competitors in a number of areas including price, standard equipment, boot space, approach/ departure angle and warranty.

Koleos’ standard equipment list is also impressive, especially compared to its rivals who can only offer features that are standard on Koleos, such as fog lamps and enhanced comfort features you’d expect on a 4x4 such as cruise control, as options.

The approach and departure angle, at 27˚ and 31˚ respectively, offered by Koleos is amongst the best available on the market and substantially better than some competitors, positioning Koleos as one of the most versatile, stylish and practical vehicles in its segment. Ford Kuga’s approach and departure angle is 21˚ and 25˚ respectively, whilst VW Tiguan offers 18˚ and 25˚.

Koleos Dynamique is offered in four or two-wheel drive form, in the dCi 150 engine.