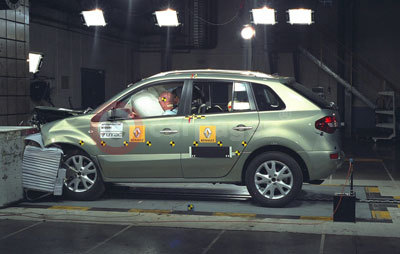 Renault Koleos is the tenth Renault model to obtain the maximum score of five stars in EuroNCAP crash tests. This result confirms the outstanding efficiency of the vehicle’s passive and active safety equipment. Reflecting all Renault’s expertise in safety, Koleos is a versatile 4x4 crossover that brings occupants the same peace of mind in the city, on the open road and motorway, and off road, notably through its Alliance-developed four-wheel drive system, which boosts active safety by correcting any loss in grip, redistributing torque between the front and rear axles ahead of electronic stability control activation.

Renault’s approach for all its vehicles is based on real-life safety. The brand focuses on developing the most efficient technologies to “prevent, correct and protect”, as well as on raising the awareness of road users.

Koleos is the tenth Renault model to obtain the maximum five-star score in adult protection. Koleos is one of only four models out of 17 tested in the small off-road 4x4 category to achieve the maximum five-star EuroNCAP rating. Safety is a fundamental feature of all Renault vehicles. Renault Koleos was developed to have outstanding levels of both active and passive safety.

Koleos benefits from Renault’s long-standing work in real-life accident analysis. In terms of passive safety, its body structure features programmed crumple zones at the front and the back. The cabin was designed as a real survival cell for passengers in the event of an accident. Renault Koleos also boasts a comprehensive range of equipment for passenger protection, including six airbags (of which two are front airbags), seatbelts with force limiters in the front and rear side seats and pretensioners in the front seats, along with Isofix anchor points for attaching child seats in the outer rear seats. The headrests have a carefully worked ergonomic design that offers maximum protection against whiplash in the event of rear impact.

On the active safety front, Renault Koleos has a stiff chassis and, to assist drivers in emergency braking, ABS with electronic brakeforce distribution and emergency brake assist (EBA) fitted as standard.

Koleos’ four-wheel drive system also makes a significant contribution to active safety by correcting any loss in grip. Developed by the Alliance and first featured on the New Nissan X-Trail, the system is used to immediately correct the slightest sign of understeer or oversteer by redistributing torque between the front and rear axles, even before the activation of electronic stability control (ESP).

For its entire range, Renault’s approach is based on real-life accident analysis and safety to develop products that are adapted to on-road realities. The emphasis is placed on the most efficient technologies to prevent any risk of an accident, correct unexpected driving situations, and protect passengers in the event of impact. Over the years, Renault has established itself as a benchmark in automotive safety, as reflected in the results obtained in press rankings.

Renault’s EuroNCAP results: The only manufacturer to have obtained the five-star maximum 10 times.