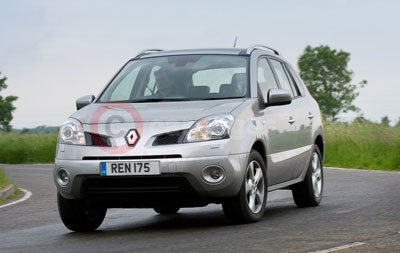 The Renault Koleos is now available for sale in the UK. The Koleos is a new 4x4 crossover which boasts MPV levels of comfort and interior space combined with robust exterior styling and genuine off-road ability, Koleos’ class-leading standard equipment puts its rivals in the shade.

Koleos is offered with a choice of two diesel 2.0-litre Alliance engines, the dCi 150 and the dCi 175. Unusually for a 4x4 crossover, Koleos dCi 150 is available with six-speed gearbox and in manual or automatic transmission.

As well as the four-wheel drive, Koleos will also be available in two-wheel drive form appealing to those who enjoy its distinctive, crossover looks and spacious MPV-like versatility complete with high visibility driving position, but have no need to use the vehicle off-road.

The Renault Koleos sets the benchmark for standard equipment

Although Koleos is a newcomer to the segment, it is already setting the benchmark with its impressive list of standard features that its nearest rivals can only offer as costly options.

For example, when comparing the specification of a Koleos Privilège dCi 150 4x4 to the Ford Kuga Titanium, a customer opting for the Koleos will receive over £3,000 worth of equipment as standard. Features such as heated seats, parking sensors and leather upholstery are expensive options on Kuga.

When comparing the same Koleos with the Tiguan Escape, the Koleos customer advantage is even larger at over £5,000 worth of equipment coming as standard on the Koleos. Climate control, cruise control, Bi-Xenon headlamps, 3D colour Satellite Navigation, leather upholstery and Bluetooth are only offered as options on Tiguan whereas they are standard on Koleos Privilège. This means a customer would pay a total price of £28,900 for the VW as opposed to £23,495 for Koleos (£23,855 if metallic paint is chosen).

This proves Koleos may be new on the scene, but it is already the 4x4 crossover to beat in terms of offering customers an affordable, well-equipped, comfortable, spacious and genuine off-road capable car.

Koleos’ practicality is evident in its split-opening tailgate, 70 litres of stowage space and impressive boot volume of up to 1,380 litres with the rear seats folded.

Off-road the Renault Koleos excels with innovative features such as Hill Start Assist, Hill Descent Control system, the ‘all mode 4x4i’ system developed by Nissan for the X-Trail (which shares the same platform with Koleos), and approach and departure angles of 27 and 31 degrees respectively. Koleos’ 3-D colour navigation system has a number of specific off-road features, including an altimeter and barometer. The vehicle’s angle of inclination, the slope and an altitude graph are equally displayed, while a digital compass takes the stress out of finding the correct heading when there are no signposts to be seen.

The ‘Super-Fold’ system, introduced on Laguna Sport Tourer, enables the 60/40 split-rear seat base to tip up and backrest fold down all by the flick of one lever in the boot. With the rear seat in the folded position, the boot floor becomes entirely flat to further facilitate loading.

Renault’s continual improvements in the quality and durability of its products are further enforced with Koleos’ three-year, 100,000 miles warranty offering complete peace of mind.

CO² emissions for Koleos range between 191 and 221 g/km, with Koleos versions falling into Band F for CO² emissions.

Insurance groups for Koleos range between a competitive 10E for the Dynamique versions and 11E for the Privilège models.