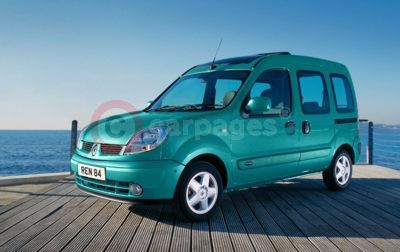 The characterful Renault Kangoo continues to be one of the most popular practical vehicles around, so to maintain its enduring appeal it is being subtly revised for the 2007 model year. The new range offers improved value for money, with extra standard equipment added for free as prices for the new models remain the same as those for the outgoing versions.

The new eight-model Kangoo 2007 range is spread across two trim levels, Authentique and Expression, with the choice of two petrol and two diesel engines, offering between 68hp and 95hp. The 1.2 and 1.6 16-valve petrol engines offer lively performance and excellent combined cycle fuel economy of 40.4 and 37.7mpg, while the 1.5-litre dCi 68 and dCi 84 common-rail diesels offer even greater torque at lower revs and 51.4 and 53.3mpg.

Another string to its bow is that the Kangoo has another unique proposition in its class - automatic transmission. For the 2007 range, this can be allied to the 1.6 16V engine on either trim level, offering even greater ease-of-use and refinement for longer journeys.

The Kangoo's successful blend of practicality and style remains untouched, with the revisions for the 2007 range focused largely around its interior, including two new interior upholsteries and several new options.

The specific improvements to the Authentique and Expression trim levels sees the former gain £200 of extra equipment, namely a 30W CD player and overhead parcel shelf to complement its new 'Kaleidoscope' interior trim. Meanwhile, the Expression receives new 'Gabor' interior trim and, when specified with metallic paint, body coloured front, rear and side mouldings, similar to those available on the New Mégane 2006 range.

Like all Renaults, the Kangoo has an extensive options list including a new Easy Pack, which for £125 includes separate boot unlocking function, 'See me home' headlights and one-touch driver's side electric window. Other options carried over to the new 2007 range include air conditioning with pollen filter (£525), alloy wheels (£500) and extra tinted glass in rear windows and tailgate (£200).

In addition to its impressive fuel economy, the Kangoo range also features the cleanest engine in its class too, in the form of the dCi 84. Beating each of its rivals such as the Citroen Berlingo Multispace, Fiat Doblò and Peugeot Partner, this engine boasts carbon dioxide emissions of just 139 grams per kilometre which is notable for several reasons as it comes in under the important 140 gram emissions threshold.

The first of these reasons is that it represents yet another Renault driving towards the company's aim of selling one million cars emitting less than 140 grams per kilometre of CO 2 by 2008. Secondly, it already achieves the emissions standard which automotive manufacturers are voluntarily working towards by 2008, and lastly and rather timely, it will undoubtedly be of benefit to owners living in areas such as Richmond-upon-Thames in South West London, where local councils are beginning to introduce sliding scale parking permit charges based on vehicle emissions.

Renault Kangoo Images may not be UK specification cars. Colours and exterior and/or interior elements may differ from actual models.