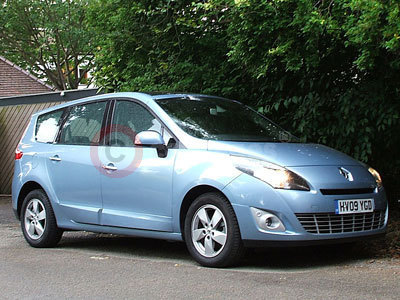 The new Renault Grand Scenic is the third model in the new Renault Megane range and represents the second generation of this trend-setting MPV.

The first Renault Scenic was launched in 1996 to much acclaim, so much so that it was voted European Car of the Year in 1997. It wasn't until 2004 that the 7-seat, Renault Grand Scenic arrived and two years later, both Scenic versions were refreshed and the Grand Scenic also became available as a 5-door.

Just as the previous Renault Scenics shared some of the design traits of the Renault Megane, especially at the rear end, as far as the MPV body allows, the new versions share similarities with the new Megane.

Overall, the new Renault Grand Scenic is more streamlined with smoother features. The front end still displays a distinct curve-line that flows down from the outer edge of the new headlights, through the front bumper and arcs under the front grille. This is a typical Renault characteristic although, it is now a little more angular than on the previous version.

Where the upper grille was divided by a large Renault emblem, it is now little more than a slit and the badge has been moved further up the curvaceous bonnet. The broad-meshed lower grille, together with the fog lamps which are positioned further towards the edge, serve to make the body appear wider than it is, which is no bad thing.

At the side, the windows have a similar shape to those of the previous model but they are, in fact, different. The front quarter-light is smaller and closer to the A-pillar, which has been move back for extra visibility, while the B-pillar now sports a gloss black finish.

There are new contours at the base of the Renault Grand Scenic's doors with recesses to allow the rear doors to open. These are the only unattractive feature in what is otherwise a much sleeker car than before. The front and rear door handles are set at different levels - each following the shoulder-line rearwards, to meet the base of the new boomerang-shaped rear light clusters.

The previous, hipped tailgate has gone to be replaced by a more sedate, if equally large, door with a new chrome trim.

Even though the new Renault Grand Scenic is longer, wider, taller and sits on a longer wheelbase, it manages to seem more car-like, which is precisely what the designers were aiming at. Although the wheelbase has been increased by only 34mm, it is enough to increase the legroom for third row passengers by 27mm and the extra height of the car allows 54mm more headroom.

Renault Grand Scenic Images may not be UK specification cars. Colours and exterior and/or interior elements may differ from actual models.