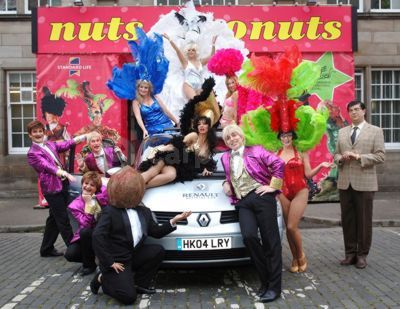 Performers and staff at Edinburgh International Festival are looking forward to a smooth run this summer - of their shows and on the busy festival streets.

Artists will be travelling round Edinburgh in comfort in a fleet of luxurious Renault Grand Espaces.

A VIP fleet of 16 top-of-the range Grand Espaces have been provided by Renault as part of an ongoing sponsorship deal between Renault, one of the UK’s top three vehicle manufacturers, and Edinburgh International Festival. Renault UK has been official car sponsor to the Festival for ten years and is now a constant and familiar sight around the narrow streets of the Scottish capital during the Festival time.

Whether dancers are braving Nicolson Street on their way to The Festival Theatre to take part in performances of Swan Lake or actors travelling to The King’s Theatre to perform in the epic eight and a half hour production of The Complete Plays of JM Synge, they can be sure of a smooth and cool ride.

The Edinburgh International Festival openED Sunday 14 August with the Opening Concert, followed by many of its own productions and big collaborations, Nuts Coconuts, Swan Lake, Curlew River, Blackbird, Impromptus, West-Eastern Divan Orchestra with Daniel Barenboim, Noh theatre and pianist Llyr Williams head the bills at theatres and concert halls throughout the city from Monday.

Nicky Pritchett-Brown, Sponsorship and Development Director, described the Espaces as "Wonderful, and perfectly suited to the multiple demands of the event. They are immensely practical at transporting soloists, string quartets, suitcases and instruments. The Festival would be a lot harder to get through without them".

A new addition to the fleet of Espaces this year is the on-board Satellite navigation system, which means that drivers - and their passengers can find the quickest route through Edinburgh’s old and new towns and get to their, media interviews, shows and rehearsals free from stress.

Two Kangoos, a Trafic van and a Mégane, also provided by Renault, form part of the team moving sets and costumes around the city.