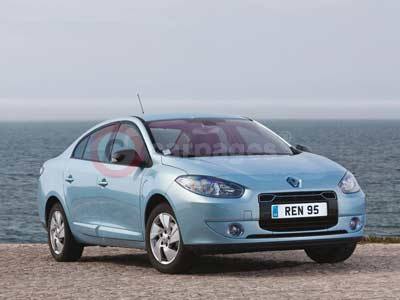 In 2009, the Renault Fluence ZE was unveiled at the Frankfurt Motor Show, and now Renault has announced that the Fluence ZE will be launched in the UK in mid-2012, aimed at private customers and fleet operators looking for an economical and environmentally respectful four door saloon.

The Renault Fluence ZE will be manufactured at the OYAK-Renault plant in Bursa, Turkey, on the same production line as that which makes the internal combustion-engined versions of Fluence.

The overall length of the Renault Fluence ZE is 4.75 metres, 13cm longer than the internal combustion-engined model allowing room for the batteries to be located behind the rear seats. The sides are also redesigned retaining the visual balance of the original version. The exterior design of the Fluence ZE utilises fluid, crisp lines.

The increased length allows for the same boot capacity of 317dm3. An integrated folding panel in the boot allows for storage of the battery charging cable. A low sill - 698mm - and wide aperture - 1020mm - allows for easy access into the boot space.

The cabin of the Renault Fluence ZE offers over 23 litres of storage space, provided in part by a nine-litre illuminated glove box, a 2.2 litre cubby in the centre console and front door bins offering 2.6 litres each.

Technology found in the Renault Fluence ZE includes an integrated navigation system, networked and adapted for electric vehicles, Bluetooth telephony and dual-zone automatic climate control, automatic headlight and wiper activation. Controls for the radio, telephone and cruise control are within easy reach without the driver needing to remove their hands from the steering wheel.

When on the move, the Renault Fluence ZE is silent, with no engine noise. The cabin's soundproofing has received special focus in order to make the most of the new environment. An audible signal and 'GO' light indicate the vehicle is ready to pull away from standstill.

The electric motor's peak power is 70kW at 3000rpm which is equivalent to 95hp and maximum torque is 226Nm. Torque delivery is instantaneous allowing for instant and constant acceleration throughout the power range. There is no need to shift gears.