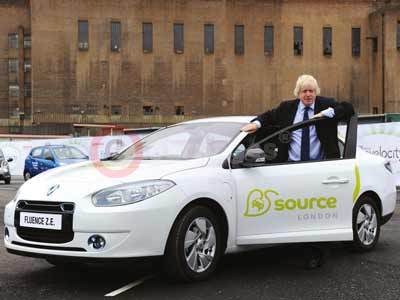 A pack of electric and low carbon vehicles were led by the Mayor around the festival's dedicated test circuit in the 100% electric Renault Fluence, making its UK public show debut.

Mayor Boris Johnson, said: "I was delighted to try out one of Renault's electric vehicles and glide it silently around the EcoVelocity test track. Trying out cutting edge vehicle technology is what Europe's largest green car show is all about. To help people opt for a greener motor, my Source London electric charge point scheme is being showcased here too."

Boris also spoke to Thierry Sybord, Renault UK's Managing Director, about the company's plans to support his electric vehicle vision with its family of four electric vehicles. The Mayor also got the opportunity to see the Renault Twizy.

The Renault Twizy is a two seater - one behind the other - electric vehicle which offers a range of up to 62 miles on a single charge, priced from £6,690. Monthly battery hire is £40 for a three year and 4500 miles per year agreement.

At EcoVelocity, a four day event held at Battersea Power Station, Renault will showcase the Fluence Z.E. and Kangoo Van Z.E. as well as provide the vehicles for visitors to test drive around the specially designed test circuit.

On sale during the first half on 2012, the Renault Fluence Z.E. four door saloon is price from £17,850 after the £5000 Plug-In Car Grant. Customers can hire the lithium-ion battery, removing the issue of battery longevity and replacement cost. For the Fluence Z.E., monthly hire costs £69.60 per month based on 9000 miles per year over a three year agreement.

Thierry Sybord said: "As the manufacturer of the first complete range of EVs, we're naturally delighted that Boris Johnson and Source London took such an interest in our products and chose Fluence Z.E. to open the show. Both are passionate supporters of greener transport for a cleaner and healthier London, so it was wonderful to see the Mayor enjoying his drive of Fluence Z.E. so much. Who knows, maybe we can tempt him to swap his bike for a Twizy in the not too distant future. We've already had a huge amount of interest from customers in our range of electric vehicles and look forward to even more after this positive endorsement, including the next few days at EcoVelocity itself."