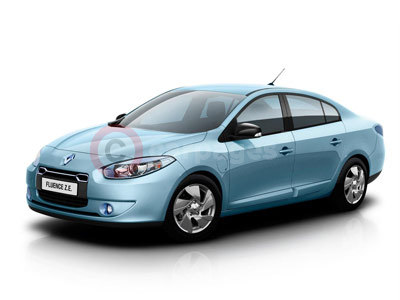 The Fleetworld Electric Vehicle Showcase at the National Motorcycle Museum in Birmingham played host to the Renault Fluence Z.E. and Kangoo Van Z.E. allowing visitors to test the vehicles on a four mile test circuit.

The Renault Fluence Z.E. on show was one of the first units to appear ahead of its official launch next Spring. Reservations for the Renault Fluence Z.E. begin in June 2011, with UK prices and specifications being announced at the same time. A European price was recently announced for an online launch version at 26m000 euros, around £17,000 after the Plugged In Car Grant. That doesn't include a 79 euro per month battery lease.

Featuring a spacious interior, cutting edge technology and a quiet motor, private and business users are already showing an interest.

Also on show was the Renault Kangoo Van Z.E. which features the same practicality functions and capacity figures as the standard Kangoo Van (ranging between 3 to 3.5m³).

Darren Payne, Renault UK's Director of Fleet and Commercial Vehicle Operations, was impressed with the response from potential buyers, commenting, "It's very exciting for us to be able to start letting business customers get behind the wheel of our Z.E. range so they can see for themselves all the intrinsic benefits of driving and running electric vehicles.

"Renault will be the first manufacturer to offer a full range of electric vehicles and there's been a massive sense of expectation. Several large organisations and local authorities have already expressed interest in the Renault Z.E. range, and we've already witnessed that many potential customers have done their homework on electric vehicles. They're keen to learn more on every aspect of electric vehicle ownership and how they will enhance their businesses as part of busy fleets, and the feedback on the drives has been overwhelmingly positive.

"Drivers rated the performance and lack of noise very highly and were particularly impressed with the comfort, quality of finish and the fact that they both drive like conventional diesel and petrol-powered models."