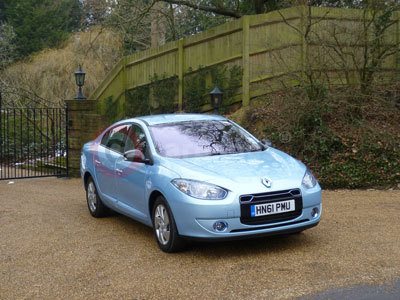 Renault is determined to make a name for itself with its electric cars. It already has three of the most interesting designs, in the Twizy, ZOE and this family sized model, the Fluence. With a roomy cabin and seats for five, the Fluence is a practical addition to the ranks of so-called zero-emission cars, although the zero bit is debatable when the electricity comes from Britain’s fossil fuelled power stations. Emissions are rated at zero at the tail-pipe, but assessed at 66 g/km on a well-to-wheel basis.

The Fluence is priced on a par with a similar size diesel car, which means that it looks rather better value than some other electric cars. That is because Renault has come up with a clever solution to some of the drawbacks normally associated with electric vehicles. One is their normally rather high initial price – even when the £5,000 government subsidy has been subtracted. Another concern is battery life, and a third worry is whether the car will hold its value when the time comes to sell it.

To resolve those issues, Renault has pitched a lower initial price, making the Fluence less expensive to buy than rival models, but you are paying for ownership of the car, not of the batteries. They remain the property of Renault, and you pay a monthly charge for their use. This costs from £75 to £135, depending on your mileage. For £75 a month you are limited to 6,000 miles a year. The company remains responsible for any attention required to keep the batteries in good health, including replacing them when they reach the end of their working life. This also applies to any subsequent owner of the car, who must continue to pay the monthly battery hire charge.

Of course the other drawback with an electric car, the familiar ‘range anxiety’ concerning the risk of the battery pack running out of power before you reach your destination, still applies to the Fluence. But for those whose vehicle use is a daily commuter trip, or family journeys that are not long distance, this car could make quite a lot of sense. It is qualifies for a free tax disc and is exempt from the London congestion charge.

The Fluence comes in a choice of two trim levels, Expression+ and Dynamique, and is priced from £17,495 to £18,395 – those are the prices you pay after the £5,000 plug-in car grant has been lopped off the list price. Plus, of course, a monthly payment for battery pack rental.

Under the skin, the Fluence is based on the saloon version of Renault’s Megane, using the same front-wheel-drive chassis, but with some fundamental differences. It is extended by five inches to accommodate the bulky battery pack that is sited above the rear axle and adds a quarter of a ton to the car’s overall weight. This added weight inevitably affects the car’s performance.

The car’s power output from its electric motor is 94bhp at 3,000-8,900rpm, and the maximum torque is 167lb ft at 400-2,500rpm. In common with other electric cars, the initial take-off feels quite lively, but overall performance is relatively modest. The car’s top speed is 84 mph, which is lowly by the standards of most other cars, although plenty fast enough for a legal limit cruise along a motorway. Acceleration to the benchmark 62 mph takes 13.7 seconds.

The car feels very normal to drive. The Fluence is well able to keep up with the rest of the traffic, and feels quite responsive when you press the throttle. There is an eco-meter on the dashboard to advise you on how economically you are driving, as an aid to eeking out battery life. The meter shows blue when road circumstances and your driving style mean that the drain on the batteries is minimal, but the colour changes to red when a heavier demand is being made on the stored electrical power, such as when you floor the throttle. Maximum range between recharges is 115 miles. If you’re heavy-footed, it’s less.

This is a 9-year+ news article, from our Renault archive, which dates back to the year 2000.

If in doubt check with your local Renault dealer as car prices and technical data will have changed since 2012.