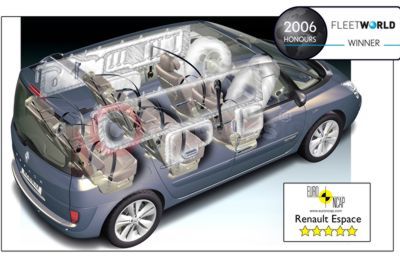 Renault has triumphed in the Fleet World Honours 2006 scoring a hat-trick of awards with Espace winning ‘Best MPV’, the Trafic van is Commercial Fleet World’s ‘Best Medium Van’ for the fourth consecutive year, and for the second year in a row, Renault also scoops the ‘Safety Award’.

The prestigious awards, presented at a glittering ceremony in London attended by VIPs from the Fleet industry, are given to manufacturers who have achieved the highest level of excellence in their sector. The judging panel is comprised of leading industry experts including Fleet World’s editorial team, members if the leasing industry, fleet managers and representatives from residual guides.

Keith Hawes, Director, Fleet & Commercial Vehicle Sales, who collected the awards, said; "Being recognised with three awards, especially in such competitive categories, is a great honour for Renault. It’s great to see, even after 22 years, that Espace remains the MPV to beat for fleet managers, and Trafic notch up its fourth successive year at the top in the medium van segment.

"I’m also particularly delighted to see for the second consecutive year Renault’s continued dedication to safety recognised by key people who work in the fleet sector, especially as recent surveys have confirmed health and safety remains the top priority for fleet managers. This award affirms Renault’s position as the brand of choice for fleets when it comes to safety and is a real triumph".

Last year saw Renault’s New Clio become the eighth model in Renault’s range to achieve the maximum five-star safety rating in independent crash tests by Euro NCAP. Renault has the safest range of vehicles on the market today, according to Euro NCAP. This confirms Renault’s long-standing policy of offering "Safety for all" - no matter what your budget or size of car.

Commenting on the award, Chairman of Judges George Emmerson said: ‘There was really no contest when it came to deciding the winner of this year’s Fleet World Honours Safety Award. Never before has there been a manufacturer with so many cars in its product-portfolio scoring top marks in the demanding and acclaimed Euro NCAP assessment.’

Fleet World editor Ken Rogers commented: ‘With Duty of Care high on the agenda of fleet managers, safety is a key priority. Renault is the only manufacturer to have eight cars with the maximum five-star rating from Euro NCAP. Laguna was the first car ever to get the top, five-star rating. Now, Espace, Modus, the entire Mégane family and new Clio have all been awarded that supreme safety accolade.’

Renault’s flagship MPV, Espace, celebrates its 22nd birthday this year and this award shows it just as modern, practical and stylish as it always was. The Espace range was revised in February with new exterior and interior features, offering even more practicality and appeal which is sure to keep it at the top.

Commenting on the award, Chairman of Judges George Emmerson said: ‘First launched in 1984, the Renault Espace has been the benchmark for all large MPVs and continues to be dominating force in this sector. Always ahead of the opposition in terms of stylish looks, specification, comfort and safety, the Espace should always be the first stop for any fleet manager looking to place large MPVs into their fleets. The fleet manager will find competitive operating costs and an impressive range of petrol and diesel engines.’

Fleet World editor Ken Rogers commented: ‘The Espace has considerable pedigree. Although the concept has remained true to the original, the shape, packaging, performance - and safety credentials - have evolved and improved since the first Espace rolled off the production line in 1984. Throughout this evolution, Espace has moved more and more up-market; the latest version is the best yet with the highest safety credentials, most luxurious interior - and most outstanding versatility. The segment leader, without question.’

Alan Cole of Glass’s Guide added: ‘Generally considered to be the model that created the market segment, Espace has had more time to develop than any other comparable model. Rather like Hoover, when a used car customer decides to buy an MPV Espace is often the first model name considered. Despite this, due to the number that are available, residual values are not class-leading. Espace is, however, a very well known quantity in this segment.’

Renault’s Trafic van wins Commercial Fleet World’s ‘Best Medium Van’ for an incredible fourth consecutive year, clearly demonstrating it remains the van to beat in the medium van sector. With an all-new Trafic due later this year, it looks set to stay at the top of the list for commercial fleet managers.

Commenting on the award, Commercial Fleet World editor John Kendall said: ‘It’s hard to believe that the Trafic has been with us for almost five years. The revolutionary looks shook the panel van sector up and it still looks fresh and modern today. It was just as forward thinking on the inside, with great attention to drivers’ needs in the cab. There’s plenty of stowage, a driving position that is arguably more car-like than any of its rivals and a dashboard design that is ergonomically sound as well as eye-catching.

‘It is also good to drive with subdued engines and a commendable balance of ride and handling both laden and unladen. Few drivers will find much to complain about if they spend their working hours behind the Trafic wheel.

Under the bonnet, the engine ranges from 1.9-litre and 2.5-litre common rail diesels providing 82PS, 100PS and 135PS. There’s also a 120PS two-litre petrol engine for those who need it. Short and long wheelbase, standard and high-roof models with a double-cab option for both wheelbase lengths gives a wide variety of choice for fleet users. Specifications vary according to the badge you choose, but there are enough of the models in big fleet hands to show that the van has what it takes.’