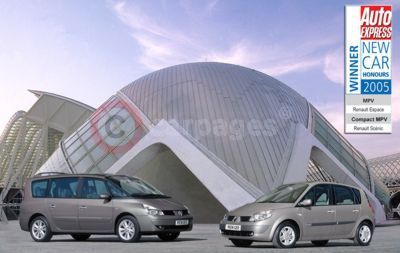 Since creating their own market niches, Renault’s two multi-purpose vehicle (MPVs), Espace and Scénic, have received widespread critical acclaim, principally for their innovative design and practicality. Not content with dominating their categories last year, they’ve both triumphed for a second consecutive year in the Auto Express New Car Honours, announced today.

Luggage space has never been a problem for Renault’s flagship MPV, Espace, but even its capacious boot and numerous stowage cubbies might not be sufficient to hold all of the awards the car has won since the fourth generation’s launch in 2003. At this year’s prestigious ceremony at the Royal Hospital Gardens in Chelsea, London, Renault’s luxury car fought off stiff competition from the Citroen C8 and Chrysler Grand Voyager to win the MPV category.

Commenting on the Espace’s design and interior features which set it apart from its competitors, the Auto Express judges said, “It’s big enough for the most demanding family's needs and flexibility can't be faulted. Access to all three rows (of seats) is great, and once in, all seven people sit comfortably on soft chairs with good legroom. Safety was also high up on Renault's list of priorities, so each person has their own integrated three-point seatbelt and there are rear curtain airbags as well. Equally, if you opt for the Grand Espace, boot space isn't overly compromised even with the third row of seats up.

”However, the Espace's unique selling point is that it looks good - especially inside. The cabin lets in loads of light, and the unusual dash layout works brilliantly, freeing up masses of valuable cubby space. Combine this with an impressive engine range, good economy, fine residuals and low running costs and the Espace is still a cracking car.”

Following in its big brother’s footsteps, the Scénic won the Compact MPV category ahead of the new Honda FR-V and revised Vauxhall Zafira, adding another trophy to its already impressive haul of award wins this year that has included Compact MPV in the Auto Express Used Car Honours and Best Small MPV in the Fleet World Honours.

“Despite its rivals’ best efforts, the French machine remains the most family-friendly car in the class. The cabin is bright and airy, packed with clever storage solutions (including underfloor compartments front and rear and more in the door armrests) and has plenty of child friendly features, including tray tables and side window blinds.

”Renault has addressed the current craze for seven seats with the Grand Scénic which features an extra pair of chairs that pop out of the boot floor. Whichever model you opt for the boot is massive, and the middle row seats can be tilted, tumbled or removed altogether. The kids won’t moan about the ride either as the Scénic is still incredibly comfortable…It's easy to drive with light controls and if you opt for our favourite model, the 1.9 dCi, the diesel is whisper quiet and economical as well…The competition might have toughened up, but the Scénic has withstood all attacks. It remains the best choice for practically-minded families.”

Summing up Renault’s success in the ever-growing MPV sector, Auto Express commented: “Its MPVs are cleverly designed to be both user-friendly and good to live with, yet also attractively designed and cheap to run… Renault might have been doing this for years, but it's not resting on its laurels just yet.”