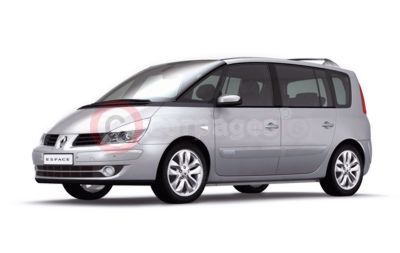 Softer styling, innovative cornering lights, the Bluetooth Nav-Com System and the new 2.0 dCi 175 Euro IV FAP engine are just some of the features poised to ensure that the New 2006 Renault Espace remains the leader of the top-of-the-range MPV segment as ordering opens now for first customer deliveries from April 3rd 2006.

With its seductive and aesthetic appeal, dynamic performance, excellence in perceived quality and travelling comfort, New Espace 2006 goes further than it has ever done before with more efficient new diesel engines, better equipment and even greater safety.

The new particulate filter-equipped 2.0 dCi diesel engine delivers 175hp and ensures that New Espace 2006 benefits from exceptional performance for this level of engine size. A new six-speed automatic transmission will soon be available on the new 3.0 dCi V6 diesel engine which will boast torque of 400Nm for even more flexibility and driving pleasure. Thanks to a choice of three petrol and four diesel powerplants, which can be coupled to five- or six-speed manual or Proactive transmission, New Espace 2006 places the accent firmly on dynamic performance and driving pleasure.

New Espace 2006’s exterior lines are softer yet its personality is as distinctive as ever and points clearly to its high-end MPV standing. New Espace 2006 is also the first vehicle of its class to feature bi-Xenon cornering lights.

Inside, the perceived quality and the sense of warmth and brightness it exudes make New Espace 2006 an even more pleasurable experience. New Espace 2006 is also available with the latest Bluetooth Nav-Com System which combines voice synthesis with a three-dimensional display. The system comes with a panoramic 7-inch screen built into the new dashboard design, Bluetooth technology for a hands-free telephone and a CD/MP3-compatible player.

The new dashboard ensures enhanced display of information, while the new Bluetooth Nav-Com System has prompted a rethink of the ergonomics of the driver's seat. Positioned between the two front seats, a single multimedia control provides access to the navigation, Bluetooth telephone and radio/MP3-compatible functions.

New automatically-attaching sliding seats ‘slide and lock’ system are available in the rear removing the need to latch the seat onto hooks in the floor rails. The seats can be taken out, moved and positioned with ease, thereby enhancing interior modularity. New Espace 2006 also has an all-flat floor.

And for complete ease of mind when travelling as a family, New Espace 2006's active and passive safety features confirm its position as the benchmark in its segment. When launched three years ago, Espace IV was the safest car ever tested by Euro NCAP.