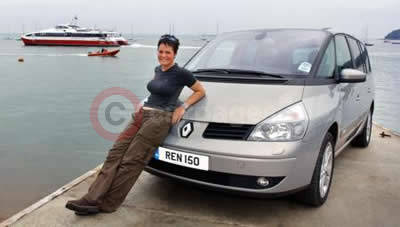 Renowned yachtswoman Ellen MacArthur chooses it as her preferred method of transport (when she’s not half way around the world on a record attempt like now!) and now readers of Fleet Week, Fleet Management and What Van? Fleet magazines have once again chosen the latest Renault Espace as their favourite MPV in the Fleet Excellence Awards 2005 for the second consecutive year and its third win in five years.

The Fleet Excellence Awards are voted for by the key people in the fleet industry, and to win one of the coveted awards is a vote of confidence by the people who sign the cheques. Winning the same award three times and for two consecutive years shows the Espace is still the car to beat in the MPV sector even 20 years after its first introduction, having won the MPV category in 2005, 2004 and 2002.

Tristan Young, Editor at Fleet Week commented on the Espace’s win: "Ever since the mid-80’s Espace has blazed a trail for the MPV segment and become its benchmark. The latest generation seven-seater launched in April 2003 offers three excellent modern diesels (including the only V6 oil-burner in the segment) as well as gaining five stars in Euro NCAP tests. Stylish, flexible, frugal and family-friendly it’s not hard to see why readers voted it number one."

Keith Hawes, Director, Fleet & Commercial Vehicle Operations, Renault UK, collected the award at a ceremony in London. He said: "It’s been a great year for Espace; it has certainly celebrated its 20th Birthday in style! It’s a fantastic honour for Espace to be chosen for the second year running and third time as the reader’s favourite MPV in the Fleet Excellence Awards.

"Sales have been exceptional for Espace during 2004 especially in the fleet sector and we intend to consolidate our position even further in 2005. The recent introduction of the new Espace Dynamique has now expanded fleet manager’s choice even further and we expect another successful year in 2005."

Ellen MacArthur is currently attempting to shatter yet another amazing world record as she tries to become only the second person - and the first woman - ever to sail non-stop, solo around the world in her 75-foot B&Q Trimaran. Ellen is going great guns at 47 days into her challenge as she crosses the ocean past Cape Horn, and is a full four days, 19 hours and 53 minutes ahead of the current record holder, so her chances of beating the record are good.

As the official car supplier to Ellen MacArthur and her Offshore Challenges sailing team, Renault UK is supporting Ellen in her endeavours and is now going for a record of its own with the most awards a car can win, given the amount of awards Espace has won over the last 12 months! Renault’s flagship Espace - now in its fourth incarnation - also celebrated its 20th anniversary last year.