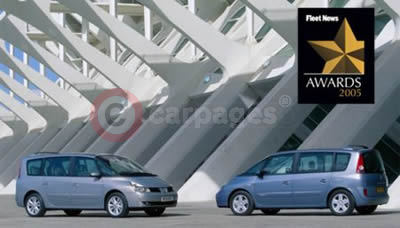 The honours just keep on coming for Renault’s flagship Espace and Grand Espace after being declared ’Best MPV’ in the Fleet News Awards 2005 at a glittering ceremony in London hosted by renowned newsreader Huw Edwards, showing it is still the car to beat even 21 years after its first introduction.

More than 1,300 of the main influencers and key decision makers in the fleet industry saw Espace/ Grand Espace beat off stiff competition from some of its direct competitors - Citroen C8, Peugeot 807, Chrysler Voyager, Fiat Ulysse and VW Caravelle - to show that is the MPV of choice for fleet customers.

The esteemed judging panel declared Espace/ Grand Espace as the "clear winner in this category, with the inventor of the MPV taking the award for its key model’s wide-ranging appeal, flexibility, driving experience, running cost, engine range and also for achieving a five-star rating in the European New Car Assessment Programme crash tests".

The judges laid out strict criteria for this highly contested category, insisting that the ‘Best MPV’ must have a combination of essential factors including strong residual values, cost effectiveness and ample space. Espace and Grand Espace could not be beaten as the perfect vehicle for fleet users allowing luxurious comfort as well as providing the reassurance of knowing their families are travelling in five star Euro NCAP safety.

Keith Hawes, Director, Fleet & Commercial Vehicle Operations, Renault UK, was on hand to collect the coveted award. He said; "Espace is now in its fourth incarnation and after 21 years its popularity shows no signs of diminishing, especially within the fleet sector.

"To win the ‘Best MPV’ award for Espace and Grand Espace in such a competitive category within the fleet market is a great honour and a fantastic endorsement of Espace as the premier MPV of choice for user choosers. I am delighted to accept the award from Fleet News."