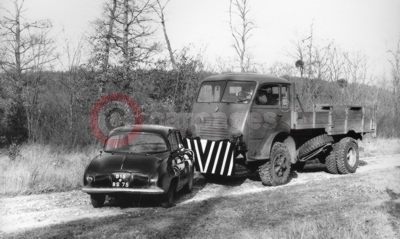 Renault has just conducted its 10,000th crash test at its Lardy Technical Centre in France. This impressive milestone illustrates the company's unprecedented commitment to safety as well as being an ideal opportunity to applaud the work of the hundreds of Renault employees who have been advancing safety for over 50 years, contributing to the falling death toll on the road.

Renault and Safety - 50 years of progress

Renault created the Lardy Technical Centre in the Paris region in 1951, to conduct tests on future vehicles and embark on its first crash tests. Over the years, research and technical advances have improved the efficiency of impact tests by considerable lengths, with Renault more often than not at the forefront of such developments. During the last 50 years, its engineers have tested nearly 11,000 vehicles (some tests involve two vehicles), made over 100,000 videos, taken almost 500,000 photos and analysed more than one million measurements.

Renault has been conducting virtual crash tests for a number of years to complement real-life testing, using these digital techniques to broaden its research areas. These tests (around 300 real and 4,500 virtual tests a year), along with the precious information gathered at accident sites, are analysed and shared by the LAB* and used to design safety systems that correspond with the reality of road accidents.

A leading player in automotive safety, Renault has been manufacturing vehicles with the highest active and passive safety levels for a number of years. Indeed, Renault has consistently been the driving force behind a number of breakthroughs in this arena.

The Laguna set the car occupant safety benchmark, which some other manufacturers still to struggle to match five years on, by becoming the first car to achieve a maximum five-star rating when it was tested by Euro NCAP in March 2001, while the Modus proved that small cars could be just as safe as much larger ones, by becoming the first car of its size to receive the same impressive accolade in November 2004. The most recent entrant to its five-star car elite was New Clio in June 2005, giving Renault a range of eight cars with the coveted five-star crash test rating from the independent testing body, Euro NCAP - by far the highest of any car manufacturer in the world.

Away from the crash test chambers, the car industry has continued to recognise Renault's commitment to safety through both its vehicles and education programmes.  What Car? magazine started giving a Safety Award eight years ago and since then Renault has won it six times, but not just for the outstanding safety of its vehicles.

In addition to protecting vehicle occupants through its active and passive safety systems, Renault continues to work towards reducing vehicle accidents and injuries through its global safety education programme.

Renault launched its international 'Safety for All' initiative in 2000, to raise awareness of road safety among young people. Since then, it has touched more than 8 million children in 21 countries. In the UK alone, where the campaign runs under the banner "Safety Matters", over 15,000 schools have benefited from the programme, which provides teaching materials to educate primary school children.