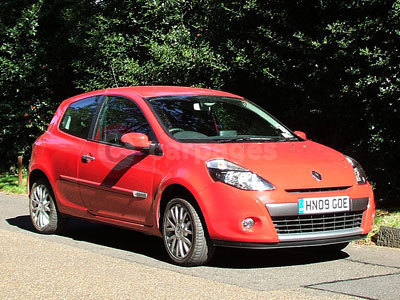 Since the first Renault Clio was launched, way back in 1990, Renault's popular small car has undergone some changes.

Originally a replacement for the Renault 5, the Renault Clio has seen us through Papa and Nicole and Thierry Henry and collected two European Car of the Year titles. The Renault Clio II arrived in 1998 and 2005 saw the launch of the Clio III and now, with a slight change in nomenclature, we have the Renault Clio 2009.

Although much the same car, in terms of driveability and comfort, the new Renault Clio now features a new front end with a similar 'face' to the new Renault Megane. The redesigned front air intake with its 'grid' mesh grille is one of the most noticeable differences and the front lights have seen some changes too, with outer contours that point towards the low-slung grille. Some of the trim levels have black surrounds to the headlights, giving a more purposeful look and all new Renault Clios now come with fog-lights.

When viewed from the side, the improved streamlining and extra length are evident. Although it is only 41mm longer than its predecessor it does make a difference to the overall look, as do the new-design, 16-inch wheels.

More changes have taken place at the rear of the car and while it retains a broadness around the hips, the waistline seems to be lengthened by new rear light clusters. Below, the bumper has seen a makeover and the reversing and fog-lights have been positioned lower and wider than before.

Inside, the Renault Clio retains its sense of quiet fun. New fabrics on the seats and easier controls are the order of the day. For instance, the cruise control and speed-limiter, where fitted, has been moved to the tunnel console, alongside the parking brake, whilst elsewhere the steering wheel-mounted stalks have been shortened.

The nicely rounded fascia is finished in soft-touch material from the mid-range, Dynamique, upwards and although quite plain, it works well with the rest of the interior. There is nothing 'fussy' about the Renault Clio - the car simply has a style that you can live with. Even the provision for the satellite navigation screen has been well done.

As you may have seen on the television advertisements, the Renault Clio TomTom Edition is now available. The Carminat system is also standard on the Initiale models, but is available as an option at other trim levels. It comes in conjunction with cruise control and the speed limiter and apart from that, the specification is much the same as the Dynamique.

Rather than an add-on, the 15cm, full-colour screen is firmly integrated onto the centre of the Renault Clio's dashboard, in its own nacelle, where it is also used for the rear parking aid graphics and audio information. The system has all you would expect from TomTom, including camera alerts and RDS-TMC traffic information, which is paid for by Renault, for the car's lifetime. It also comes with a small remote control 'fob', so there are no fiddly buttons to distract the driver.