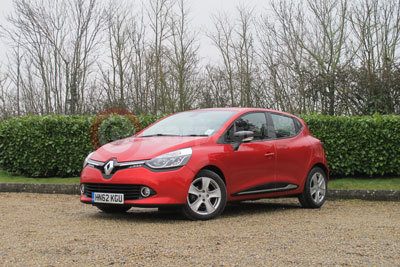 Successive models of Renault Clio have been around since 1990 and the little supermini hatchback has done very well for Renault as one of Europe’s top-selling cars. Twice, in 1991 and 2006, the Clio has been voted European Car of the Year.

According to Renault, this latest Clio - the fourth generation of car to bear the name - hails “the return of va-va-voom”. That was the catchy slogan that accompanied the second generation Clio, but seemed to evaporate with the last one. The current car’s predecessor had been around since 2005 and was produced with three or five doors, but so far the latest car comes only as a five-door model.

Visually and dynamically this one seems to have taken a big leap forward. It is styed to look a bit sharper and cheekier, where the previous car had become somewhat more conservative. Now it is rejuvenated in looks, cabin design and driver appeal, and is notable for this diesel version, the 1.5 dCi, which at the time of writing is the car with the lowest CO2 output of any model on the UK car market.

The Clio comes in both petrol and diesel versions at prices starting from £10,795. The car we tested is expected to be the longer-term best-seller of the range, popular for its particularly good fuel economy and market-leading emissions.

The engine in this Clio is a 1.5 litre (1,461 cc) direct injection common-rail turbodiesel. It develops 89 bhp at 4,000 rpm and peak torque is 162 lb ft at 1,750 rpm. This translates on the road into a 112 mph top speed and 0-62 acceleration time of 12 seconds. Performance is not sparkling, but it is very adequate for a small hatchback with exceptional economy. The combined average fuel figure of 88.3 mpg is a big attraction, and although most owners could not expect to see that in real life driving, 80-ish mpg should be achievable in daily use. CO2 output is a lowly 83 g/km, putting it in band A for road tax, and ensuring a free tax disc throughout the car's life unless the rules change in a future Budget.

This is a 8-year+ news article, from our Renault archive, which dates back to the year 2000.

If in doubt check with your local Renault dealer as car prices and technical data will have changed since 2013.