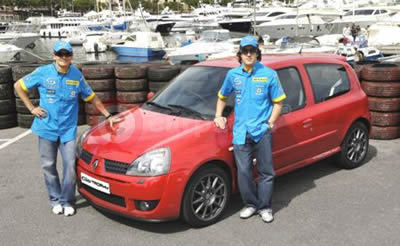 The UK market is the most important in the world for Renaultsport as we take 50% of all production from the Renaultsport factory in Dieppe and the most popular model has been the Clio Renaultsport, launched as a 2-litre 172 in 2000.

The key ingredients of the Clio Renaultsport have always been true sports car dynamics and driver feedback in a compact and practical size. A recipe that provided the most fun you could have behind the wheel of a car - well without needing a second mortgage - so a very special version has been developed to mark the end of production of the current Clio II Renaultsport.

Currently leading both Driver’s and Manufacturer’s F1 Championships, the Renault F1 Team drivers Fernando Alonso and Giancarlo Fisichella unveiled the new Clio Renaultsport 182 Trophy in Monaco during the Grand Prix weekend. Quite appropriate for a car with the brief of being the finest handling, most fun front wheel drive hot hatch ever.

Available to order from Monday 30 May 2005, only 500 Clio Renaultsport 182 Trophy will be produced at the Renaultsport factory in Dieppe between June and September as production of all Clio Renaultsport finishes in September. Priced at £15,500 on the road, Clio 182 Trophy is the most technically advanced Clio 2-litre ever produced and was designed to a specific brief for British drivers, being sold only here, with a small number of left hand drive for Switzerland.

The Trophy version represents the pinnacle of the research and development that has gone into the Clio Renaultsport 2-litre since its launch in 2000. Trophy has a specific chassis set up designed to optimise the handling of the car on the road and on a track using race car technology.