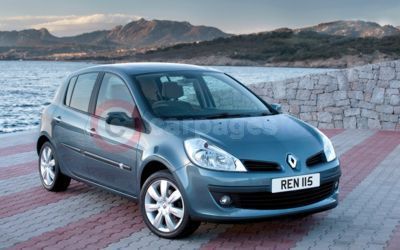 New Clio three door’s talents have bowled both the public and Press over, with many top awards already under its belt including the much-coveted European Car of the Year 2006 and Best Supermini at the What Car? magazine and Test Drive magazine awards 2006. Not content with that, New Clio remains the car to beat in magazine group road tests remaining at the top of the pile against every rival car it has been tested against to date.

Now, with the arrival of the five-door New Clio, the success looks set to continue. In UK showrooms from 27th January, New Clio five door offers the same top quality package as the three-door but with five times the Va Va Voom!

The five door offers even more practicality and ease of access to all that space, for those who regularly carry rear seat passengers but don’t require the extensive versatility and deceptively spacious interior offered by the Modus mini-MPV. A Va Va Voom sized helping of luxury and style are also assured with the top-of-the range Privilege and Initiale, offering the ultimate in luxury in the supermini segment, and available exclusively only on the five-door version.

New Clio five-door is suitable for all budgets with prices starting from £8,995 for the entry-level Authentique 1.2 16V 75 rising to £15,050 for the luxurious Initiale with its powerful 1.5 dCi 106 engine, six speed gearbox and leather-lined interior. This is a £600 premium over the three door Clio.