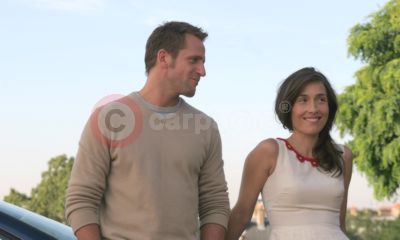 Renault Clio advertisements have been deeply engrained in the public’s consciousness over the last 14 years with a light hearted series of characters representing the chic, fun and stylish French supermini that has now been a firm favourite in the UK Top 10 sales chart for over 10 years.

The launch of an all-new Clio on Saturday 15th October means the start of an all-new campaign taking over from Thierry Henry’s four-year search for the meaning of Va Va Voom. Aired first during the evening of Thursday 13th October, new characters Sophie (French) and Ben (British) show that New Clio has "Twice the Va Va Voom" by adding a modern twist to the age-old battle of France vs. Britain!

Whilst France and Britain still like to battle it out on a regular basis, the message from the new Clio commercial is simple - Clio combines the best that these two nations have to offer by being a French car but with many British designers on the Clio team. Hence twice the Va Va Voom.

The Ben and Sophie characters follow in the footsteps of some of the most memorable characters to ever appear on television, the first of whom, of course, were Nicole and Papa, that famous French father and daughter who launched the first Clio way back in 1991. For seven years and eight episodes, actors Estelle Skornik and Max Douchin dashed around Provence and Paris in their Clios.

The cliffhanger of Nicole’s wedding to either Vic Reeves or Bob Mortimer at the launch of Clio II attracted an amazing 23 million viewers one Friday night in May 1998 - six million more than normally watched Coronation Street, the programme during which it aired. You may remember that Vic was jilted at the altar as Nicole ran off with Bob, in a new Clio of course!

According to the independent Car Advertising Research Study by Sofres Automotive, the Nicole and Papa story is the most successful car advertisement ever, with a record 93% recall figure and, more importantly, interviewees could recall that the couple were advertising a Renault Clio. As well as being the best-known car commercial, the British public voted it their favourite car commercial of all time in a Channel 4 / Sunday Times poll in 2000.