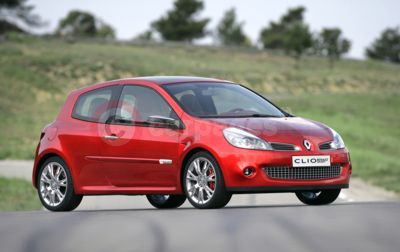 As production of the highly successful Clio Renaultsport 2 litre and V6 three-litre comes to an end, sports car enthusiast can rest assured that Renaultsport, the competition and sports car branch of Renault, have some exciting replacements waiting in the wings. With an all-new Clio III on sale in October, Renaultsport have built a more extreme “concept” version of next year’s Clio Renaultsport 2.0 as a teaser.

Clio Renaultsport Concept is the ultimate development of the dynamic new Clio III.

Assertive lines, a powerful character and an exclusive interior make this a show car that blends refinement with high performance. A demonstration of Renaultsport Technologies expertise, it is set to become a worthy successor to the Clio Renaultsport 2.0 182 and it brings a first to this market segment: an underfloor air diffuser. Like the extractor vents in the front wings, it is derived directly from Formula 1 racing cars. The independent mountings for the front suspension guarantee that the handling will be precise and sporting. Clio Renaultsport Concept heralds the production model that is due to go on sale in 2006.

Retain the original spirit of the Clio III while enhancing its intrinsic qualities and dynamic capabilities: this was the challenge Renault Sport Technologies' engineers were asked to rise to with Clio Renaultsport Concept, an exceptional car combining performance, excitement and driving pleasure.

The exclusive red of the Clio Renaultsport Concept is wholly in keeping with its character. Although easily recognisable, the original lines are emphasised by more pronounced curves. The specific styling of the side bodywork side design accentuates the power and energy of the car's silhouette. Enlarged front and rear wings, the lowered stance and the profiled side skirts combine with the extractor vents and diffuser to enhance its aerodynamics and high-performance pedigree.

Seven-spoke, 18-inch wheels with body-coloured highlights reveal large brake discs and calipers. A large, chrome-zinc-coloured air intake grille in the front bumper hints at the potential of the 2.0 16V's naturally-aspirated engine developed by Renault Sport Technologies. The radiator grille and the fog light surrounds are also chromed, along with the door mirrors, which add a high-tech touch. At the rear, the diffuser follows the chrome-zinc theme and the twin exhausts stress its competition heritage.