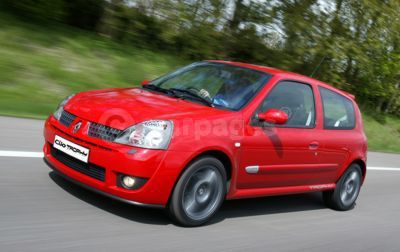 Following a very successful display at last year’s Canary Wharf Motorexpo, in the shadow of the UK’s tallest building, this year’s show sees the world debut of a car sure to appeal to the fast-moving business world - the Clio Renaultsport 182 Trophy, the latest hot hatch creation from the performance arm of Renault.

Set in the heart of the capital’s thriving business complex in London’s Docklands area between 13-19 June, the free-to-visit show celebrates its tenth anniversary this year, having grown rapidly since its inception in 1996. Away from the indoor settings of dealer showrooms and crowded motor shows, Canary Wharf’s modern architecture and landscaped gardens provide the perfect backdrop for Renault’s innovative and striking model range.

The centrepiece of Renault’s six-model display throughout the week-long show in Canary Wharf’s Cabot Square marquee will be the company’s newest pocket-rocket, the Clio Renaultsport 182 Trophy. Hard to miss in vivid Capsicum Red, the Trophy has been developed specifically for keen British drivers seeking a compact hot hatch with sublime handling and super car-rivalling performance for both track and road.

With first deliveries in July, only 500 Clio Renaultsport 182 Trophy will be produced at the Renaultsport factory in Dieppe between June and September as production of all Clio Renaultsport finishes in September. Priced at £15,500 on the road, the Trophy version represents the pinnacle of the research and development that has gone into the Clio Renaultsport two-litre since its launch. Trophy has a specific chassis set up designed to optimise the handling of the car on the road and on a track using race car technology.