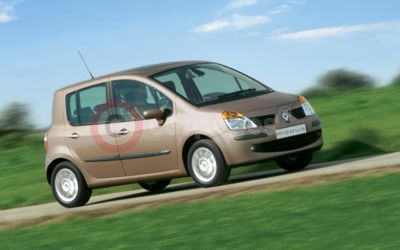 Proving that Renault’s small cars have as much substance as they do style, the New Clio and Modus have scooped three awards between them in Test Drive magazine’s inaugural Car of the Year awards, including the overall Readers’ Choice Award.

With an enviable array of talents including its ingenious ‘boot chute’ and ‘Triptic’ multi-adaptable rear seat system, the Renault Modus has continued to attract an ever-growing fanbase since its launch in 2004. In fact, Renault’s funky mini-MPV already struck gold twice last year, winning both Scottish Small Car of the Year and Diesel Car magazine’s Best Supermini. This time around, Modus won not just once, but twice, in Test Drive’s 2006 awards, including the prestigious Readers’ Choice Award and Compact MPV title.

In winning the Readers’ Choice Award, Modus fought off all of the other fifteen category winners, including considerably more expensive cars such as the BMW 5 Series and Nissan 350Z. During the course of a day’s vigorous testing, the Test Drive Car of the Year reader test team car continued to bestow considerable praise on Renault’s "small car with a big heart", including comments such as, "It’s the most ingenious car here" and "It’s so practical and well thought out and it’s fun to drive."

In the Compact MPV category, Modus drove away with the Gold Award thanks to its good driving experience, solid safety credentials, storage space and overall versatility. Indeed, the magazine enthused, "The Modus has MPV flexibility yet is as easy to live with as a supermini - a genuine winning combination."

For the last ten years, Renault’s chic Clio has consistently featured among the UK’s Top 10 best-selling cars and the signs are already looking extremely positive for the latest version. Not content with scooping the European Car of the Year 2006 title in November, New Clio continued its impressive introduction as it joined its sister model on the podium, taking gold in the Supermini category.

Since its launch in October, New Clio has attracted numerous plaudits for its impressive blend of fine driving characteristics, interior quality and space, refinement and style. Its latest award win certainly attested to these credentials, "The new Clio’s excellent, composed ride and its refined, relaxed feel are aimed at customers who have to live in the real world. Long motorway journeys need hold no dread."

Test Drive’s final verdict on the car was equally noteworthy, "The new Clio may still be a little car, but it has convinced us it’s big on big-car features. And it will convince anyone who buys it too."