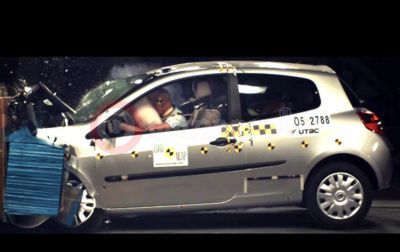 The latest results from the Euro NCAP crash test programme are revealed today in Stockholm and confirm that the new Renault Clio III has been awarded the maximum five-star rating. New Clio is already attracting considerable praise from the media for its new styling, so this prestigious crash test result serves to show that the new car is as safe as it is stylish. The third-generation Clio goes on sale in the UK on 15 October, with the order book due to open in August, when pricing and specification will also be announced.

With a total score of 32.67 points out of a possible 37, New Clio becomes the eighth Renault to secure the highly coveted five-star crash test rating and also joins an elite group of ‘safe’ superminis, as prior to this round of testing, only two other superminis had ever achieved the maximum five-star score, the first of which was the Renault Modus launched last year.

Like Modus, the latest version of Clio, one of Europe’s best-selling cars, also secured the maximum four stars for child protection, confirming its position as an ideal family car. Clio III has benefited from all of Renault's safety expertise and demonstrates the company's determination to offer "safety for all". As the only manufacturer to have eight vehicles with five-star ratings from Euro NCAP, Renault reinforces its leading position in the field of safety.

Throughout the various tests, Euro NCAP inspectors emphasised the excellent level of occupant protection afforded by Clio III. The car's structure performed perfectly, dissipating energy and preventing any intrusion into the cabin. Post-test analysis of the dummies demonstrated the effectiveness of its restraint system, particularly the two-stage adaptive front airbags and anti-submarining system.

Uncompromising protection for all passengers

Clio III comes with Renault’s third-generation System for Restraint and Protection, which guarantees optimum protection for occupants wherever they are sitting. Depending on the version, the system comprises six to eight airbags: two twin-stage adaptive airbags in the front, four side airbags (two lateral airbags in the front seats and two curtain airbags to protect the heads of front and rear passengers) and two anti-submarining airbags on the three-door version.

When a front impact occurs, the system comes into operation, taking account of the size of the driver, which is measured by a sliding sensor. The front seats are also fitted with an anti-submarining system and 400daN load limiters that protect the occupants' chests.

In the rear of the car, the danger of submarining is restricted by seat belts with pretensioners, plus short, vertically installed belt buckles and a special seat design. The rear side seats have pretensioners and 600daN load limiters - features which Renault is the only manufacturer to offer. Clio III also comes with a luggage retention bar which is screwed into the floor at the base of the rear bench seat back, holding back luggage in the event of impact without taking up boot space. In addition to these safety features, New Clio also benefits from an audible seat belt reminder and a warning light on the instrument panel to remind drivers to fasten their seat belts.

Having won four stars in Euro NCAP's child protection tests, Clio III joins Modus as one of the safest cars in its category in this respect too. Renault has equipped Clio III with four Isofix anchorage points built into the rear side seat and front passenger seat.

Clio III’s body shell employs new grades of steel and materials ensuring improved absorption and dissipation of kinetic energy. The front, side and rear of the body are all designed with built-in programmed deformation zones, reducing both the impact and severity of an impact felt by the car’s occupants. The high strength cabin forms a non-deformable survival cell and assists in preventing the intrusion of powertrain components (engine, gearbox, battery, casings and accessories), which are designed to stack up under impact.

Padding in the door panel of Clio III, plus an aluminium bar adapt the load exerted when a side impact occurs to provide effective protection for occupants. If the side impact is against a pole or tree, a curtain airbag also deploys to protect the heads of front and rear occupants while side airbags in the front seats protect their chests.

In the event of a rear impact, Clio III offers an innovation from Renault for the front seats: seats and headrests that absorb energy. This new technology represents a significant breakthrough in protecting occupants' necks against the effects of whiplash. When the height is adjusted, it is the headrest itself which slides rather than the rods, which are no longer rigid. When an impact occurs, the occupant's back can be pushed further back into the seat until his or her head comes into contact with the headrest. The rear bench seat comes with three integrated headrests on most versions, while the seat itself and its anchorage points are reinforced to restrict reclining of the seat back under impact.

With eight vehicles awarded five stars by Euro NCAP to date, Renault has the safest car range for adult protection: