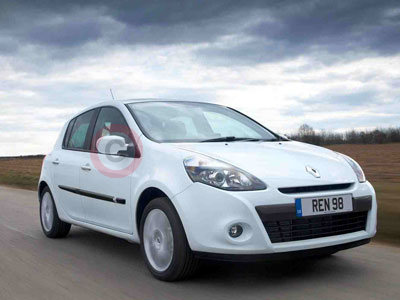 Renault's least polluting current production vehicle, the 98 gram CO2 per kilometre 1.5-litre dCi 86 Renault Clio, takes to the road this weekend in the inaugural RAC Future Car Challenge, pitting its talents against a field of around 60 of the greenest cars on the market.

The RAC Future Car Challenge involves following the London to Brighton Veteran Car Run route, but in the opposite direction, and is open to the latest electric, hybrid and low-emission passenger cars, light commercial vehicles and motorcycles. The challenge starts at Madeira Drive in Brighton on Saturday 6th November 2010 at 8am and ends 57 miles later in London's Pall Mall, where each vehicle will be assessed to measure its energy usage.

The pair of 'eco'-Clios will be driven by two high-profile motoring journalists; Simon McBride from Parker's and Richard Aucock from Motoring Research, both of whom have a keen interest in 'green' technology.

Its headline low-emission figures have been achieved thanks to a wide range of technical enhancements, including aerodynamic aids at the front and rear, revised engine mapping, taller gearing and reduced rolling resistance tyres. The fuel-sipping Renault Clio can achieve 76.3 miles per gallon on the combined cycle, meaning the duo should be able to complete the challenge using under a gallon of fuel.

The Renault Clio 98g is just one of Renault's pioneering vehicles when it comes to lowering the emissions of its car and van range. At the Paris motor show, as well as showing its Z.E. (Zero Emission) family of four vehicles, which launches next year in the UK with the Renault Kangoo Van Z.E., followed by the jaw-dropping two-seat Renault Twizy quadricycle, Renault ZOE supermini and Renault Fluence Z.E. saloon, it also unveiled its 'eco-champion' models and new 1.6-litre 130hp diesel engine.

The new 1.6 dCi 130, the latest in a series of downsized Renault powertrains, including its 1.2 and 1.4-litre petrol TCe (Turbo Control Efficiency) engines, is initially destined for the Renault Megane and Scenic ranges next Spring, and boasts 30 grams less CO2 emissions, plus 20% greater fuel economy, than its 1.9-litre predecessor.

The Future Car Challenge is organised by Motion Works for the RAC who believe the event is the biggest of its kind in Europe. The formal finish will be in Pall Mall followed by a special ceremony and presentation in Regent Street. Here, the vehicles will join the display of more than 100 pre-1905 motor cars in the London to Brighton Veteran Car Run International Concours in front of an estimated 250,000 crowd.