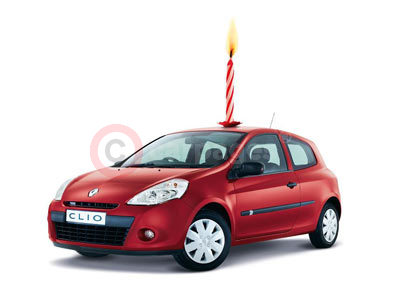 And if that was not reason enough to hot foot it down to your nearest Renault dealer, one lucky driver could be joining Nicole, Papa and Thierry Henry and 10 million other Renault Clio owners, when they drive away in a Renault Clio 20th Special Edition as the top prize in a national test drive draw.

Until the end of June 2010, Renault dealers throughout the UK will give customers the chance to win a Renault Clio 20th Special Edition, worth almost £15,000, simply by entering a prize draw after taking a test drive in a new Renault Clio.

There are also 20 romantic weekends at a Mr & Mrs Smith hotel in Paris to be won. And, the first thousand customers that go for a spin, will get a copy of another French icon, the Mr & Mrs Smith French Hotel Collection guide, worth £20. Fresh off the printing presses, the book comes with a year's 'Blacksmith' membership, entitling the bearer to a wealth of perks and privileges at their hotels.

Famously launched in 1990, the Renault Clio was the star of one of the most successful UK car advertising campaigns ever, featuring Nicole and Papa. The success of these adverts continued throughout the 90s, until the phrase 'Va Va Voom' was uttered for the very first time in the 'Size Matters' campaign starring seductive French actress, Helene Mathieu, for the launch of the first Renault Clio Renaultsport, the 172. Three years later, French striker, Thierry Henry, built on the phrase's cult status in his series of ads which ran from 2001 to 2004 and the phrase is now part of everyday speech, with a place in the Concise Oxford English dictionary.

Indeed, the popular supermini has come a long way since launch, selling more than 10 million worldwide, and one million in the UK. It's also still the only car to have been voted European Car of the Year twice; in 1991 and 2006.

Now in its third incarnation, the current Renault Clio retains all of the traits of its forebears, such as impressive levels of comfort, safety and refinement.