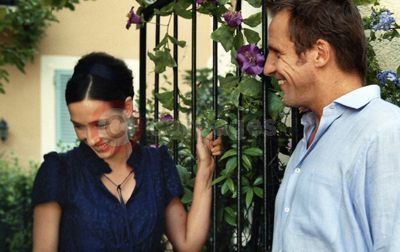 Passions run high among the three main characters in the second instalment of the New Clio campaign from Renault as the Britain vs France debate continues apace with the help of the New Clio Renaultsport 197.

Ben and Sophie, the flirtatious characters who argued the merits of Britain and France in the first episode of the hit campaign, return to continue their provocative debate in the latest work called "More Va Va Voom" by embarking on their first date courtesy of the New Clio Renaultsport 197 driven by Ben.

A high profile debut in cinemas from 17 th November at screenings of Daniel Craig's much-awaited debut as James Bond in Casino Royale, "More Va Va Voom" sees Ben (British) and Sophie (French) take up the argument of whose country boasts the best culture - and ultimately how the best of both is found in the New Clio Renaultsport 197.

The new sports version of the Clio is the latest in a long line of performance hatchbacks from Renault starting 30 years ago with the 5 Gordini. The 197's aerodynamics is enhanced by a rear diffuser, which has been inspired by Renault's double World Championship winning Formula One car.

The second instalment sees the couple re-unite for their first date after meeting in Paris at the end of the first episode. Ben adopts a scientific position, where function and brains preside over Sophie's art, form and beauty.  But what of passion?  This they cannot disagree on and all of these characteristics are found in the Clio Renaultsport 197.

Whilst Ben drives to collect Sophie, you see her relaxing in the bath and getting ready for the date. After collecting her, the Clio Renaultsport stretches its legs around the famous streets and tunnels of Monaco where Renault's F1 Team have been victorious. After an evening out they return to Sophie's home where she tries to tempt Ben with "Coffee?" The only possible answer from him of course is "Tea". We'll have to wait and see if Sophie relents to his request.

The 40 second spot - which will run nationally on terrestrial TV, cable and satellite from January 2007 - sees the Clio Renaultsport 197 make its TV advertising debut.

Jonathan Wignall, National Advertising Manager for Renault commented, "With "More Va Va Voom" another great Clio advertising saga is evolving and it also marks the film debut of the highly acclaimed, latest hot hatch from Renault, the Clio Renaultsport 197 which shares the passion and style of the characters."

Developed by Publicis, media planning and buying for the campaign is handled by Carat.

Ben and Sophie first hit UK screens in October 2005 with "Twice the Va Va Voom", adding a modern twist to the age-old battle of France vs. Britain. Played by British actor Jeremy Sheffield and French actress Annelise Hesme, the characters follow in the footsteps of some of the most memorable characters to ever appear on television, the first of whom were Nicole and Papa who launched the first Clio way back in 1991.

French actress Hélène Mahieu became the new face of Clio II in 1998, with her seductive voice speaking the words "Va Va Voom" for the first time in the "Size Matters" campaign.

The Clio campaign baton was handed over to Arsenal and France football star Thierry Henry in 2002. Over the next three years, he was to search for the definitive meaning of 'Va Va Voom' - but even with the help of the Muppets, was unable to pin it down.

Even the Oxford English Dictionary, had a go at defining it with 'The quality of being exciting, vigorous or sexually attractive'. As Ben, Sophie and the Clio Renaultsport 197 show, it means different things to different people, but always with passion and dynamism.