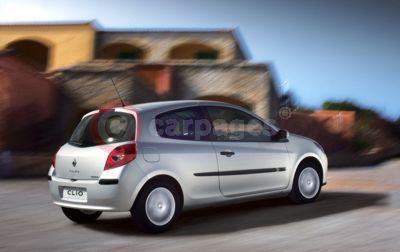 The order books are now open for one of the UK’s Top 10 best-selling cars, ready for first customer deliveries of the all-new Clio III from 15th October 2005. Prices and equipment levels are released and prove Renault is continuing its positioning of offering class-leading equipment levels at very competitive prices even though the new Clio looks set to raise the overall standard in the supermini class once again.

Since Renault unveiled the first pictures of its all-new Clio III on June 16th, revealing a new dynamic look and a high quality and spacious cabin, interest levels have been high, not surprising considering that Clio has been a Top 10 UK best-seller for over 10 years.

Available to order from Thursday 18th August, New Clio III will be launched in the most popular three-door version first which accounts for 75% of UK Clio sales, with the five-door to follow in January 2006. With prices starting at £8,895, new Clio III is available with several innovative features that are new for the B segment, including the Renault hands-free unlocking and ignition keycard, and tyre pressure monitoring.

Some of the clever features first introduced on Modus such as dedicated cornering headlights are also available on Clio, as well the powerful and economical 1.5 dCi 106 engine with a six speed gearbox - a first for the supermini B sector - which debuted to much acclaim on Modus earlier this year.

Prices designed to hurt the competition

Expected to be the most popular trim level is the sporty Dynamique with the mid range 1.4 98hp engine taking the bulk of the orders. If Clio’s main competition were hoping that Renault would be pricing this all-new car higher at the beginning of its life then they are in for a shock - one that will be a pleasant shock for customers.

New Clio III is fresh, stylish, dynamic, sporty, modern yet practical and with a wide choice of engines, impressive insurance groups and an array of options available, New Clio III offers excellent value for money as well as a pleasurable driving experience assured.

Initially available in three door, the New Clio III range will be enhanced throughout 2006 with the arrival of five door, Quickshift5 gearbox with paddleshift and further trim levels.

The Clio Renaultsport model will also arrive in 2006 with the concept version of the production model debuting at Frankfurt Motor Show 2005.