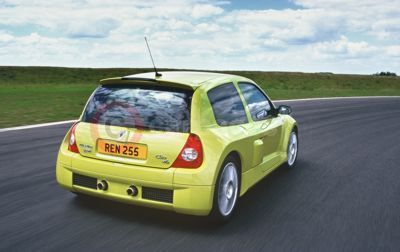 They said it came from another planet, like some mad experiment in bodybuilding for cars, yet the Clio Renaultsport V6 255 melted hearts and as Autocar magazine said, "It has the ability to leave onlookers speechless". Well it will soon be no more as production of the Clio V6 ends this month due to the introduction of an all-new Clio in October.

If you’ve been hankering after a new one of these pocket supercars then it is now or never. A car which when EVO magazine tested one in their annual Car of the Year competition concluded "Is there a more striking, exotically configured, more involving and characterful car on sale today for £27,000? We can’t think of one"

What made the Clio Renaultsport V6 so special? Well as if taking out the back seats of Thierry Henry’s favourite bit of Va Va Voom and putting in a 3-litre V6 engine was not enough, Renaultsport then designed an outrageous version of the Clio body shell to house it all in with huge flared wheel arches to house the 18" alloy wheels.

The best bit was the sound of that engine right behind you. A pure race bred guttural growl developing into a wailing roar as the rev counter soars past 7,000rpm. And this from a company which is the number one selling brand in Europe who also make everything from Kangoos to Espaces. But, maybe that is why Renault is number one because they have the confidence to go for niches that other manufacturers shy away from unless they can sell huge numbers.

Built by hand at a dedicated Renaultsport Alpine factory in Dieppe, Northern France, Clio Renaultsport V6 230 first went on sale in 2001 with an updated V6 255 model launched in

2004. Even though the UK market was the biggest customer for the Clio V6, hand-built production of only two cars a day meant exclusivity was always guaranteed. 258 of the original car were sold here and 340 of the V6 255 up to last month, around 50% of all those made by the factory.

With no plans to make a V6 version of the next Clio (Renaultsport have other models in the wings to keep them busy) then classic status is assured alongside its predecessor, the mid-engined 5 Turbo from the ‘80s.

As Jeremy Clarkson said on BBC Top Gear after testing one last year " My perfect 10 car garage would definitely have one of these - no question". If you’ve found space for the 10 car garage Jeremy, you better place your order now!