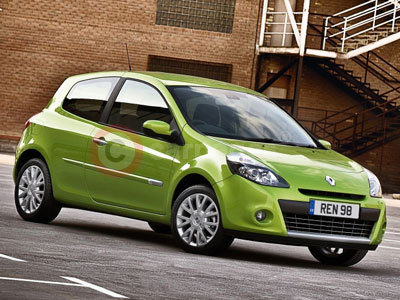 Behind the scenes, the development of several of Renault's electric vehicles continues relentlessly ahead of their launch in 2011. Meanwhile, in the pursuit of some purer air before then, the forward-thinking French brand has announced its cleanest production car yet with the new dCi 86-powered Renault Clio, emitting just 98 grams of CO2 per kilometre.

Set to be available in three- and five-door guise, the new Renault Clio offers not just reduced guilt driving, but also the promise of lower fuel consumption, at 76.3 mpg (combined cycle, an increase of 12.1 mpg) and a theoretical range of 923 miles between fill-ups.

Such headline-stealing figures have been achieved principally through a series of improvements to the Renault Clio's aerodynamics, engine and tyres. Overall, the new versions offer an impressive 17g/km reduction in CO2 emissions (a gain of 15 per cent) compared to the current mode, without any impact on the car's performance.

The new versions of Renault Clio will sell at the same price as the 115g/km version, a further sign of the Renault eco² signature's aim to make ecological and economical vehicles available to as many motorists as possible.

The Renault Clio dCi 86 Renault eco² will be unveiled on 13th January 2010 at the Brussels Motor Show, Belgium. Order books will open in France on 9th February and later this year in the UK.