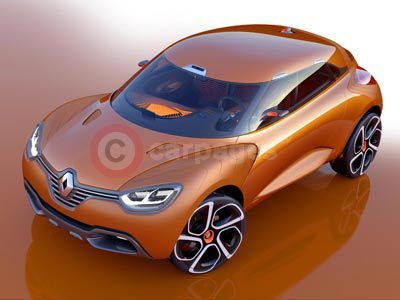 At the 2009 Frankfurt Motor Show, Renault revealed its new brand identity which puts people at the forefront of its concerns. The new, ambition design strategy that resulted from this is founded on different stages of the human life cycle with each phase taking the form of a specific concept car.

The first, the two-seater DeZir, expressed 'falling in love', the passion present at the beginning of any new adventure. Now Renault Captur, which will debut at the 2011 Geneva Motor Show, addresses the second phase of this cycle, that of two people exploring the world around them.

In its proportions and fluid curves, the Renault Captur evokes movement and lightness, yet at the same time displaying powerful and muscular all-terrain cues. Just as with DeZir, angles, corners and lines have given way to sensuous and natural forms.

The orange theme has been carried over to the cabin which also features fluorescent highlights picked out by a constant stream of light. "My main sources of inspiration were the human body, outdoor sports and urban styling," explains the colour and trim designer, Kana Watanabe. "I wanted Captur to radiate warmth and dynamism."

The interior of Renault Captur is designed to be both welcoming and occupant-friendly. The impression of lightness expressed by the exterior is dominant here, too, with the front seats attached to the centre console as if suspended in mid air. The passenger compartment is restrained and pure, with no superfluous equipment. Innovative and ingenious materials have been employed, allowing the designers to play with light and optical effects. The centre console, door casings and dashboard are formed using a translucent material rather like a second skin. At the front of the cabin, this includes a glimpse of the high-tech fibre ropes, luminescent in places, which have been used for most of the passenger compartment.

Renault Captur makes use of the Energy dCi 160 twin-turbo engine concept, developed from the new Energy dCi 130 that will eventually replace the 1.9 dCi. Downsizing is a key element in Renault's strategy to meet its declared objective of being Europe's leading automaker for low CO2 emissions. The range of electric vehicles will run alongside internal-combustion engined models that combine performance with reduced fuel consumption. The Energy dCi 160 twin-turbo fits perfectly within this strategy.

It produces 118kW (160hp) from a capacity of 1.6 litres - that's a specific power output of 100hp per litre. Peak torque (380Nm) is available from as low as 1,750rpm, giving powerful acceleration from low revs, as well as refined performance under all driving conditions. Paired with a dual clutch EDC gearbox, this driveline promises genuinely enjoyable driving with CO2 emissions of less than 99g per kilometre.

Renault Captur's performance is further enhanced by the RX2, a novel system that improves traction at low speeds. Should one of the two driven wheels lose traction, this entirely new mechanical self-locking differential transfers all or part of the engine's torque to the wheel with the most grip. Driving on slippery roads and tracks thus remains smooth and effortless.

Renault Captur also marks the debut of the Visio-System, an innovation that uses a forward-facing camera mounted at the top of the windscreen to provide driver-assistance functions. This new technology is able to embed synthesised images into real-time images of the road ahead displayed on a central screen; this is the principle of augmented reality, aiming to enhance the driver's perception of the external world by superimposing purpose-designed elements. The system helps reduce driving stress, for a relaxed, reassuring drive.

Renault Captur Images may not be UK specification cars. Colours and exterior and/or interior elements may differ from actual models.