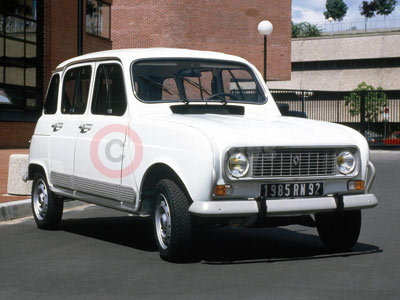 As the third best-selling model in automobile history and the best-selling French car ever across the world with sales in excess of eight million units in more than 100 countries, the Renault 4 has become a motoring icon.

In 2011, Renault will be celebrating its 50th anniversary which provides the brand's Histoire & Collection department with a unique opportunity to stage and take part in a long list of major events. A car has been entered for January's historic Monte Carlo Rally, for example, and the model is due to star at February's Retromobile classic car show in Paris. It will also receive red carpet treatment at the third 4L International event which will visit the Loire Valley chateaux in July 2011.

La Renault 4 was the fruit of a concept. In 1956, Pierre Dreyfus, then president of the Regie Nationale des Usines Renault, launched the notion of a "blue jeans" car. Like the now-familiar article of clothing which is worn the world over, he wanted to produce a versatile, inexpensive car with a worldwide calling which could match the changes in society that were being observed as the 1960s approached.

Following a five-year incubation period, the Renault 4, the make's first front-wheel drive passenger car, was unveiled to the Press before going on display at the 1961 Paris Motor Show. A van and three saloon versions were launched simultaneously: the R3, which was dropped from the catalogue the following year, the R4 and the R4L (the "L" standing for luxury), soon to become the household name for a model that lost no time in finding a place for itself in the French public's hearts.

Its unrivalled interior, low running costs and ability to adapt to all types of use made it an instant hit. Just six years after its launch, Renault 4 production exceeded the million mark, and other records were broken as the car reached a total production figure of 8,135,424 in the course of its 31-year career.

The Renault 4 was a global success and was produced or assembled in no fewer than 27 countries (in addition to France), some as far afield as Australia, South Africa, Chile and the Philippines. Indeed, six in ten sales were outside of Renault's home market. During its illustrious career, the Renault 4 was made in several different versions, including a van, a four-wheel drive vehicle and a cabriolet. Other variants, such as the Rodeo, and a long list of limited editions were also released, the best known of which in France were the Parisienne (1963), the Safari (1975), the Jogging (1981) and the Sixties (1985).

Meanwhile, the model benefited from its own off-road racing championship and was a favourite means of transport for young people itching to explore the world. It was also seen on such celebrated motorsport events as the Monte Carlo Rally and Paris-Dakar. It even finished the celebrated African rally-raid on the podium one year.

In 1992, a numbered special edition farewell version - "Bye-Bye" - was released to salute the incredible success of the model, which continued to be manufactured in small numbers in Slovenia and Morocco until 1994.