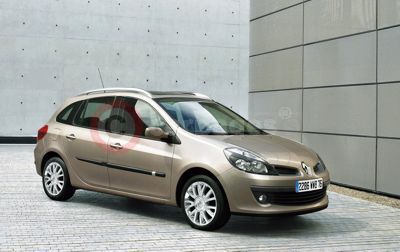 With no less than seven world premieres at this year’s Frankfurt Motor Show, including five new production cars and two concepts, Renault will arguably be the busiest manufacturer at this year’s event as its unprecedented product revolution moves into overdrive.

Amongst those production cars making their world premiere at the Frankfurt Motor Show is the Clio Sport Tourer, which Renault has released exclusive pre-Show pictures of to give a taster of what’s to come in Frankfurt.

Although details of most of the other newcomers are still being kept firmly under wraps, including a couple of attention-grabbing concept cars, the Hatch and Sport Tourer versions of New Laguna will be among those making their first public forays before going on sale in the UK from October and January 2008 respectively.

Joining the key models for Renault Commitment 2009 is this first-ever estate version of Renault’s hot-selling Clio supermini. The new model, Clio Sport Tourer, echoes many of the design cues from those of the Clio Grand Tour Concept, which was unveiled in Geneva earlier this year.

Clio Sport Tourer is firmly focused on leisure pursuits and strikes a perfect balance between sleek design, with its angled rear screen, and spaciousness, with the generous volumes of its luggage area (439 litres). At 4.2 metres in length, it is a compact vehicle that builds on the strengths of Clio III in terms of driving pleasure, interior space, comfort and safety.

Clio Sport Tourer goes on sale in the UK in Spring 2008. Full details will be released nearer launch